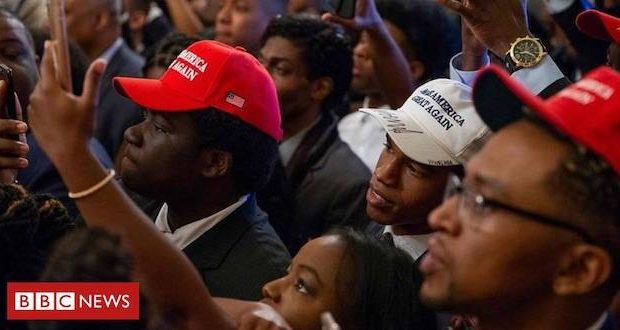 Is Donald Trump heading towards a 50-state sweep in the 2020 election? That’s what some political analysts are saying after new polls that show surging support among African American, Asian and Hispanic voters. These are the voters that have traditionally voted democrat.

That support may be one reason Democrats want to remove Trump from office before November.

The new Emerson poll puts Trump at a whopping 35 percent with black voters and an amazing 38 percent with Hispanics who now outnumber blacks as the largest minority in the nation. Trump has more than tripled his support among African Americans while Hispanics, who have gained their citizenship legally, appreciate his clamping down on those bypassing the immigration process.

“If you add in Asian voters at 28 percent approval,” notes Emerson’s director of polling Spencer Kimball, “our number is very close to the new Marist poll,” which finds Trump’s approval at 33 percent among non-white voters.

An amazing and historic number for a Republican.

But before you discount it as just one poll, other data suggests the same thing making it even worse for Democrats. A Rasmussen Reports poll has Trump support among black voters at a strong 34 percent, and even the new CNN poll, which has in the past undercounted the President’s support, still has Trump’s approval among non-white voters at 26 percent.

And, this week in the midst of impeachment hearings, polls show Trump’s support among all Americans as high as 52 percent.

But many may ask why gaining the support of only 1 in 3 blacks is a good thing.

The answer is in the details of the Democrat Party’s base which relies on blacks for a heavy turnout for their candidate.

Young African American Trump supporters celebrated the president during a White House leadership summit this evening, and the event featured several chants of "U.S.A.," a call to prayer and numerous jabs at the press.

When you look at the numbers from the 2016 and the percentage of votes Trump received from Black, Asian and Hispanic voters, if you increase those votes to match the current polling numbers, he would almost certainly win every single state in the Union. Did you hear that right? A 50-state sweep and perhaps the largest electoral landslide in history.

On top of that, Trump would begin his second term not only with an Electoral College landslide but also a popular vote mandate. Something the Democrats have been complaining about since Trump lost the popular vote in 2016.

How is this possible?

How has Trump courted a significant number of minority voters to his side, even while some Democrats call him racist?

Black voters were quite familiar with Trump before he became president. He was a household name in many African American homes from his TV persona. Add to that his work with minorities in New York and Florida, several awards for improving race relations and minority hiring in his many businesses and his outreach and support among many in the black community and you see how Trump became a “teflon” president. Accusations of racism just didn’t stick in light of the facts.

This teflon Trump has a tremendous negative impact on future black support for any Democrat. Especially in a year where the majority of Democrat Primary candidates are white men.

Since 1980, Republicans have virtually lost all support in the black community. Republican candidates for president have averaged only 9% support from the African Americna community according to research. Romney’s support dropped to just 6%. Blacks just didn’t like Republicans. But Trump is the first president, some black leaders say, to put policy behind his rhetoric. He has in essence, raised a generation of African Americans into the booming economy enjoyed by other minorities which was one of his key election promises.

Trump did increase his support among blacks in 2016 after a hard-fought campaign. He gained 25% more support in the black community than Romney but still came in at only 8 percent. A paltry number for sure but it was a start.

Second is the economy. Blacks and Hispanics are enjoying the best economy, along with the rest of America, in over 50 years. More blacks have moved into the middle class under Trump’s short 3-years than in all of Obama’s two terms combined. Trump may have started the greatest migration of minorities into the middle class than any other president in history. And this from a president the media and many Democrat leaders called “racist.”

The latest polls showing black support for Trump, even in the midst of 90 percent negative media reporting and an impeachment hearing, have Democrats shaking in their boots. Democrats are slowly losing an entire demographic of the American people that they had taken for granted since Republicans supported Civil Rights legislation against Southern Democrats.

Black Americans are thinking for themselves as Kanye West has encouraged them to do. They will probably tip the election in a big way in 2020. Just not in the way Democrats had hoped.