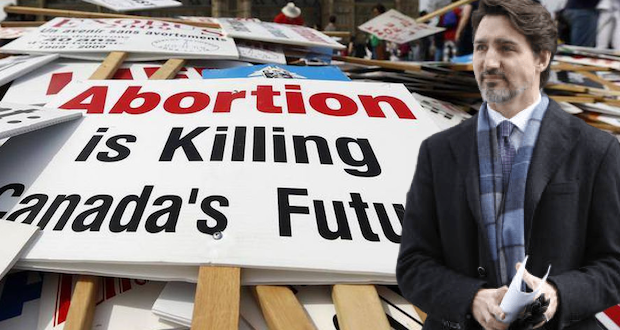 Canada may strip charity status of all groups that oppose abortion

Canada may ban the charitable status of groups the liberal government of Justin Trudeau deems “anti-abortion”.

The move is being condemned as an “attack” on constitutional freedoms and a misuse of the Canada Revenue Agency’s powers.  But observers say it is not surprising given the authoritarian direction the country has taken with Covid restrictions. Now, Trudeau is in a tight re-election campaign and needs to turn out pro-abortion voters.

The Liberal Party, headed by Prime Minister Justin Trudeau, is putting forth the  “Forward. For Everyone” platform says that “a re-elected Liberal government will … [n]o longer provide charity status to anti-abortion organizations (for example, Crisis Pregnancy Centres),” saying they “provide dishonest counselling to women about their rights and about the options available to them at all stages of the pregnancy.” The Trudeau government also promises up to $10 million for an information portal that will include a section that “counters misinformation about abortion.”

READ: What Canada’s crackdown on religious liberty looks like

Marty Moore, a lawyer for the Justice Centre for Constitutional Freedoms (JCCF), told The Epoch Times it’s not the government’s place to target charities over ideology.

“It’s hard to think of a more blatant attack—I always say this, but then I’m proven wrong by the next day by what the government announces—on fundamental freedoms of expression and belief, that a government literally said we are going to target what we view as misinformation and we’re going to now politicize the heretofore revered charitable status,” he said.

“Whether it’s Ducks Unlimited or Greenpeace, … the government’s role is not to scrutinize their ideology or their political position, but to make sure that they’re doing public good and not financially embezzling money that is dedicated to these charitable causes.”

Pregnancy Care Canada (PCC), which describes itself as “a best practice, Christian, national association” and has 81 pregnancy centres affiliates, says its “staff and volunteers provide medically accurate information on all three options: abortion, adoption, and parenting,” according to a fact sheet on its website that PCC executive director Laura Lewis shared with The Epoch Times.

What’s at stake is “the risk of imposed politically motivated ‘values tests’ on all who serve in the charitable sector,” the PCC fact sheet says, adding that “one must consider the possibility and probability of other charitable organizations being targeted next.”

“How far does that go as far as applying to religious organizations, churches, mosques, temples, maybe synagogues, that would be anti-abortion in their religious views?” he asks.

“To now take charitable status and weaponize it into an ideological club with which to beat political and ideological opponents is so contrary to the Charter. It’s actually very shocking and concerning to me to see that it’s not been more widely reported on.”

This is not the first time the Liberals have set requirements that prevented pro-life organizations from accessing financial aid programs. In 2018, the Canada Summer Jobs program required applicants to affirm their support for abortion as a condition of receiving funding. The program was scrapped in 2019 following a court challenge by the JCCF.

Previous: For the Martyrs plans march in Washington to call attention to persecuted Christians
Next: Conception Abbey welcomes you as Christ