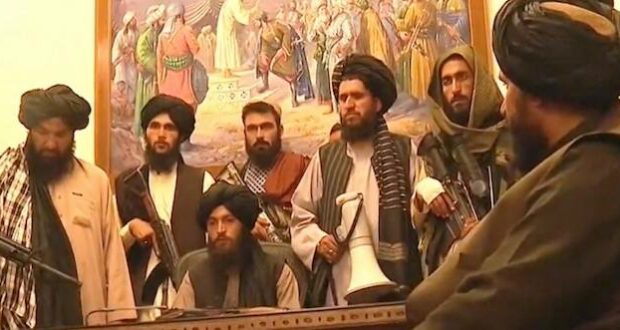 Christians under threat as U.S. flees Taliban takeover of Afghanistan

As a humanitarian crisis explodes in Afghanistan while the United States makes a hasty retreat from the Taliban, the White House remains virtually silent. The country’s Christians are also silent because they’re in hiding.

The administration’s top spokesperson, Jen Psaki, reveals in a voicemail message that says she’s “out of the office” until Aug. 22, according to news reports ranging from CBS News to Fox News. Also absent are key personnel from the Biden administration.

The absence of key people from the administration comes as President Joe Biden was pictured alone at Camp David during a video call. Missing were the administration’s cabinet and military advisors that typically populate the operations room during national and international crises.

Foreign policy experts on Monday called the situation in Afghanistan the most serious event to face the United States since the attacks on Sept. 11. Thousands of Americans and tens of thousands of other nationals remain in the country’s capital with no clear plan to evacuate them.

It was just July 8 when President Joe Biden told the American people that they had the situation under control and that there would be no evacuations off the roof of the embassy. “This is not Saigon,” stated Biden.

Over the weekend Vietnam seemingly repeated itself as the United States evacuated by helicopter personnel off the roof of the U.S. Embassy. The Taliban quickly took over Afghanistan’s capital, including the presidential palace and key government offices.

Tens of thousands of Afghans have fled to the international airport. Estimates put the number of people, both foreign and Afghani, that need to be rescued at 88,000. The staggering number is expected to swell as the Taliban reinstates sharia law. News reports state that women have already been beheaded for showing their hair, music has been banned and girls schools are already being shuttered.

The country’s Christian community, already a small minority, is said to be in hiding. The Taliban, like ISIS, has a history of immediately murdering Christian families as the terrorists move into an area. They are typically given a choice to convert to Islam but few do.

It is assumed that many Christians, who had fled to Kabul from outlying areas as the Taliban advanced, are also at the airport.

“The Taliban has been ‘waiting in the wings’ these last 20 years, ever since they were pushed out of power. Now it seems within a few weeks they will control the entire country,” Todd Nettleton with The Voice of the Martyrs USA says.

“We don’t have to wonder what they’re going to do. We’ve seen it,” Nettleton says.

“We know about the oppression of girls; they provided a haven for Osama bin Laden; Christians were persecuted under the Taliban.”

Nettleton says that under the U.S. occupation during the last 20 years, the Christian community grew, even as the country was still one of the worst abusers of religious freedoms.

But it is not just Christians under threat. Other forms of Islam that do not conform to the strict adherence of Islam practiced by the Taliban, are also targets.

As The Taliban seized the presidential palace in Kabul on Sunday, Afghan President Ashraf Ghani fled Kabul, the country’s capital.

Taliban officials declared the conflict between the terrorist group and Afghan forces over. The Taliban is prepared to declare the nation the Islamic Emirate of Afghanistan.

At the same time, the U.S. Embassy warned Americans still in Kabul to “shelter in place” as the airport there reportedly took fire from Taliban fighters. Video footage also showed Afghans storming the airport in an attempt to get onto flights leaving the country.

The crisis, coming as the Biden administration stumbled in its withdrawal after two decades in the country, is happening as Biden has not held a public address. Vice President Kamala Harris also avoiding media appearances. Harris has been absent since Aug. 10. Biden fled to Wilmington, Delaware, and later Camp David, Maryland, on Aug. 12 as the Taliban began to retake dozens of regional Afghan capitals.

In a written statement on Saturday, Biden asserted he was in close contact with his national security team and giving them direction “on how to protect our interests and values as we end our military mission in Afghanistan.”

The president said he authorized the deployment of some 5,000 U.S. troops to help evacuate Americans and allied personnel, as well as Afghans who assisted troops over the past years.

He also said that U.S. officials had conveyed to the Taliban that any action they took that put U.S. personnel or the U.S. mission at risk “will be met with a swift and strong U.S. military response.”

Biden’s lack of a public address on what’s happening has triggered criticism from many, with Democrats and Republicans questioning the disappreance of the administration from public appearances.

“I’m stunned at what’s missing- where is Pres Biden? How is he MIA during this generational foreign policy crisis? We have a total leadership vacuum that is humiliating + inexcusable. Especially in these impossible times, we need leaders who will stand up and be counted!” Rep. Peter Meijer (R-Mich.) wrote on Twitter.

“President Biden owes the American public an explanation as to why he led from behind and allowed terrorists to prevail,” Sen. Bill Hagerty (R-Tenn.) said in a statement.

But speeches now will not help the millions of Christians and Muslims who run afoul of the new Sharia laws being set in place.

“Right now, a lot of what we can do is pray for our brothers and sisters because the situation is so fluid and because the delivery of aid on the ground is so fraught with danger.”

Nettleton says the public must pray for wisdom for Afghan believers deciding whether to stay in their country or flee. “It is absolutely crucial that we lift them up in prayer,” Nettleton says.