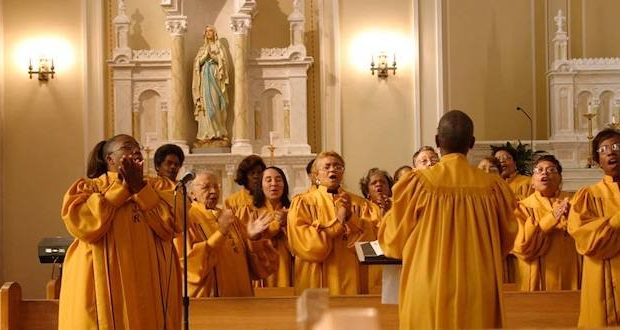 The choir at Our Lady and St. Rose Catholic Church on a Sunday morning.

The Quindaro neighborhood in Kansas City, Kan., is a historically African American community. On Sunday mornings, however, race becomes irrelevant as Our Lady and St. Rose Catholic Church serves a diverse congregation

Bangert, a nun with the church, lived next door to it from 1996 to 2016. Although predominantly a black congregation now, Bangert, who is white, says diversity and tradition are among the church’s strengths.

Next year, the church celebrates 100 years at its current location. Two churches came together when the original St. Rose of Lima merged with the nearby Our Lady of Perpetual Help. A fire nearly destroyed the building in 1950. Although the school next door has been closed for many years, weekly mass at the church still takes place every Sunday morning.

Barbara Bailey oversees the operation of the church as the pastoral associate. She knows the church’s history better than just about anyone. And Bailey, who is black, knows that history is complicated.

“This was a white church,” she said. “When my mother and my grandparents came from Alma, Kan., she was eight, it was an all-white church and at that time they had to sit in the last row if they wanted to attend church.”

She has witnessed the shift from segregated to multi-cultural to diverse, but predominantly black with white and Hispanic congregants. “And the white people that were still attending this church have died, they didn’t leave, they died,” she said. “They were buried from the church.”

Father Nick Blaha became the church’s priest two months ago. In his 30s, Blaha grew up in Johnson County and graduated from Rockhurst High School – a very different world than Quindaro Boulevard He was aware of the neighborhood’s challenges, and had heard about a recent robbery at the church where several items were stolen. But he knows one can’t judge any community by its worst elements.

“The church is sacred,” he said. “Nobody would want to touch that. But I know the people there who also feel that way and say this is crazy, `Who would do that?’. So just being able to move in and get to know the people gives you such a better apprehension.”

Bailey sees the institution as serving a purpose and providing a foundation to the community. As the community of Quindaro turns a corner, the church is there with it.  “It’s a blessing that we’re still here from things that happen,” said. “But the church has stayed and we’re not going anywhere.”