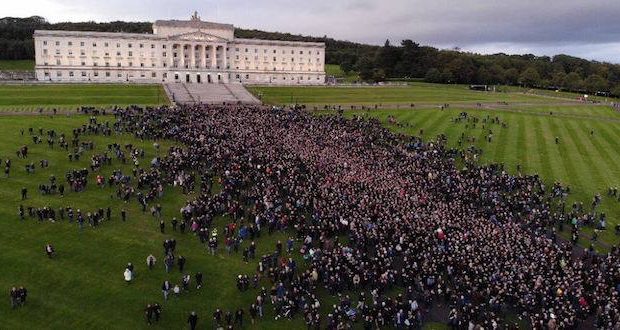 Tens of thousands of Irish citizens have spontaneously protested at the center of Irish government over a recently proposed change to the nation’s abortion laws. The “silent protest” was in response to British parliament legislation passed in July which orders Northern Ireland to get in line with the UK’s liberal abortion laws.

Currently, under the 1945 Criminal Justice Act (Northern Ireland) abortion is almost completely illegal in Northern Ireland. Exceptions can be made if abortion is required to save the life of the mother, or if continuing the pregnancy puts her at imminent risk of harm.

In 2016-2017, there were just 13 abortions carried out across Northern Ireland. In comparison, across both England and Wales, there were roughly 200,000. The 1967 Abortion Act widely legalized abortion across all of Great Britain and makes provisions for the termination of unborn babies up to 28 weeks’ gestation.

The sentiment in Northern Ireland, however, is very different. A nation rooted in the Christian tradition, images from the “NI Voiceless” march illustrated the fact that vast swathes of Northern Irish society — men and women, young and old — continue to care deeply about the protection of unborn babies. An estimated 20,000 people showed up to the march, which amounts to some 10% of the entire capital city of Belfast.

While Northern Ireland is officially part of the UK, it has a devolved governing assembly which legislates on important domestic matters. However, since 2017, the Northern Ireland Assembly (Stormont) has not been functioning — it collapsed upon the resignation of former deputy First Minister Martin Mcguiness amid accusations of scandal and corruption between the two parties, the Democratic Unionists and Sinn Fein.

With no bipartisan agreement forthcoming, and with various pro-abortion organizations relentlessly lobbying the British government, Westminster parliamentarians decided that it was time to act. So, they passed a bill which will liberalize the abortion laws in Northern Ireland if Stormont does not restart and legislate on the issue before October 21.

This has angered pro-life campaigners in Northern Ireland, who feel like they’ve been strong-armed into the legislative change. Indeed, many of those in attendance at the march held banners that declared, “We were not asked.”

“Some of us as ordinary people just couldn’t sit by and not stand and be counted,” the organizer of the event, Paul Coulter, told the BBC.

“We weren’t asked about this, our elected representatives don’t support this and public opinion here doesn’t support it.”

Over the past several years, tensions have been high between the two governing parties, with the historically-protestant/Unionist DUP favoring a continued union with the United Kingdom and the historically-Catholic/Irish Republican Sinn Fein campaigning for a break with the British Government and a uniting of Ireland. Indeed, Sinn Fein still practices abstentionism — its elected officials refuse to sit in Westminster’s parliament out of protest against British rule.

It was a culmination of these religious and ethnic tensions, combined with a fundamental geographical disagreement, that contributed to the brutal civil conflict which engulfed Northern Ireland in the 1970s, ’80s and ’90s. This period of warfare was known as “The Troubles” and claimed thousands of lives.

McGuiness agreed to take the position of Deputy First Minister, while Paisley took the helm as First Minister. The pair were previously sworn arch-enemies, but, over time, they became close friends, even gaining the nickname “the chuckle brothers” due to how much they laughed together.

Upon the signing of the Good Friday Agreement, it seemed that a relative compromise had been found and a historic peace achieved — paramilitary groups laid down their arms and bombings tapered off. However, in the two decades since, cross-party governing between the two sides has been fraught with delay and frustration.

Along with the liberalization of abortion laws, Westminster has also taken aim at same-sex marriage, which is currently prohibited in Northern Ireland. In a double-issue vote in parliament, MP’s decided that this should also to be legalized if Stormont cannot get back up and running.

Previous: NOAA refutes false media reports about Trump and Hurricane Dorian
Next: Here’s why America canceled talks with the Taliban