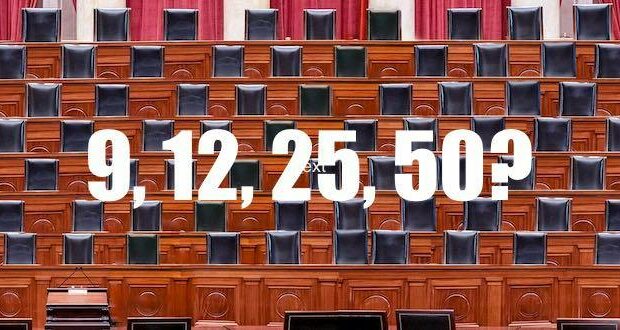 A civil liberties group delivered a letter and petition telling the Presidential Commission on the Supreme Court of the United States (PCSCUS) that it should reject court packing. The effort comes amid Democrat proposals to expand the nation’s highest tribunal to make it more amenable to progressive legislation that fails to meet Constitutional checks and balances in the current court.

“Since our country’s founding, the Constitution has stood as a bulwark against threats to liberty and fundamental rights. Time and again, courts have protected Americans—small and great alike—from government overreach and the silencing of dissent,” Kelly Shackelford, president and chief executive of the Plano, Texas-based First Liberty Institute (FLI), wrote in a Sept. 15 letter made public on Oct. 6.

The letter was addressed to professors Bob Bauer and Christina Rodríquez, co-chairs of the PCSCUS. President Joe Biden appointed the PCSCUS in April to study proposals to expand the Supreme Court from its current nine members to as many as 13.

Biden described the purpose of the PCSCUS as “to closely study measures to improve the federal judiciary, including those that would expand access the court system.”

Many Democrats in the most liberal wing of the party want to expand the high court in the hope that doing so will prevent its current 6–3 conservative majority from ruling as unconstitutional proposals to expand the federal government’s authority and powers.

“If politically motivated schemes to reform the Supreme Court are successful, the judiciary will no longer be a safeguard of our civil liberties. Instead, it will be little more than a political tool of the executive and legislative branches used to crush the freedom of all Americans,” the letter stated.

“Current discussions of ‘court reform’ are transparent, partisan plots designed to achieve purely political objectives through the use of raw power. The commission should reject such ‘reforms’ that attack the integrity of our courts and open the door to the demise of our freedoms.”

Attached to the letter were the signatures of more than 402,000 Americans collected from FLI’s supremecoup.com website. A spokesman for FLI says the group spent “many hours de-duping the names.”

The letter referenced the 1937 controversy when President Franklin D. Roosevelt considered a proposal to expand the high court to as many as 15 judges. The letter quoted the Senate Judiciary Committee’s Sen. Burton K. Wheeler, a Montana Democrat, who rejected Roosevelt’s proposal, saying “create now a political court to echo the ideas of the executive and you have created a weapon … that can extinguish your right of liberty, of speech, of thought, of action, and of religion.”

The letter also quoted the Senate committee’s conclusion that “independent courts are the last safeguard of the citizen, where his rights, reserved to him by the express and implied provision of the Constitution, come in conflict with the power of governmental agencies.”

The United States isn’t the only country that has dealt with controversy about the proper number of judges on a nation’s highest court, according to the letter.

“International experience readily demonstrates the dangers posed when political branches influence or seize control of the judiciary. In Hungary, Poland, Turkey, and Venezuela, governments packed their courts, weakening the judiciary and strengthening the political power of the executive branch. Such ‘reforms’ proved fatal, eventually undermining each nation’s constitutional system,” the letter stated.

In the case of Venezuela, the letter noted, then-President Hugo Chavez succeeded in expanding that nation’s supreme court to 34 from 20 justices.

“Soon thereafter, he added another 14, thereby more than doubling the court’s size. In more than 45,000 total rulings since the political expansion of the nation’s judiciary, the Venezuelan high court has issued zero rulings critical of the Chavez or [the succeeding Nicolás] Maduro regimes,” the letter stated.

“Most Americans (63 percent) view the [PCSCUS] primarily as a partisan proposal to increase political power. Indeed, the American public regularly views the judiciary as the more trustworthy and reasonable of the separate and equal branches of our republic,” the letter stated.