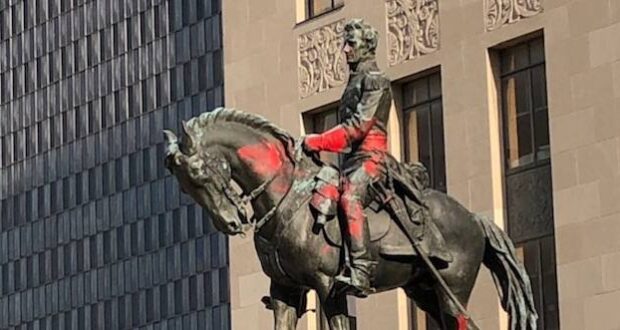 Donald Trump is not the only president on the November ballot. Jackson County voters also will decide the outcome of Question 2: “Shall Jackson County, Missouri, remove the statues of Andrew Jackson now located outside the Jackson County Courthouse and the Historic Truman Courthouse in Independence?”

The county was named in honor of Gen. Jackson in 1826, two years before he was elected the country’s seventh president. He is riding a horse in both statues, which have little written information. The downtown statue just says “Andrew Jackson,” and the Independence statue notes that it was “presented to the people of Jackson County” by President Truman in 1949. Truman was a Democrat.

The statue was vandalized during protests over the summer.

If voters say to take them down, the statues will be placed at buildings elsewhere in the county, possibly displayed with signs giving historical context of Jackson’s complicated legacy. Jackson, a military hero from the War of 1812 who warded off Southern secession during his presidency, also was a slave owner, and he signed the Indian Removal Act that forced Native Americans off their land and triggered the infamous, thousand-mile Trail of Tears in which they were forced to move west, often with the black slaves that they owned.

After the downtown statue was vandalized in late June, amid the post-George Floyd social unrest, Frank White, the county’s first black county executive, called on the County Legislature to start a process including public hearings that would lead to the statues being placed elsewhere. A couple legislators supported that sentiment, but Legislature Chair Theresa Cass Galvin, R-Lee’s Summit, pushed to put the issue on the ballot.

White has said his desire to remove the statues isn’t about erasing history. “We can never do that,” he said. “This is about standing on the right side of history.”