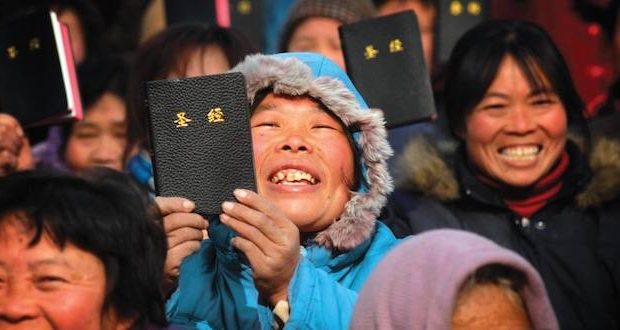 Photo courtesy of Bibles for China.

The entire Bible now has been translated into more than 700 languages, with more than 5.7 billion people having both the Old and New Testaments available in their native tongues.

“Every time we hear of the Bible being translated into another language, we know that means that for the first time the people in that language group can fully access the complete picture of God’s story,” said James Poole, executive director of Wycliffe Bible Translators. “It’s good to take a step back and realize what this 700th Bible means: 5.7 billion people who speak 700 languages now have the Bible in the language that speaks to them best. That is a remarkable figure and continues to grow.”

Wycliffe listed three recent Bible translations that could have been the 700th translation: The Huichol (Wixáritari) Bible was launched in Mexico, the Ellomwe Bible launched in Malawi; or the Igede Bible, which is used by a Nigerian ethnic group.

“It’s amazing that there is so much Bible translation going on that we can’t pinpoint the 700th Bible,” Poole said. “We live in exciting times, when the vision that all people will be able to read or hear God’s word in their language is becoming a reality.”

The American Bible Society also celebrated the news, pointing out that Bible translation has rapidly increased in the past few decades because of advances in translation technology and an unprecedented level of partnership among Bible translation agencies.

“We are grateful to God, our ministry partner and the financial partners whose generosity makes this Kingdom work possible,” ABS CEO Robert Briggs said.

Still, the group noted that the work is far from over, because more than half of the world’s 7,000 languages do not have access to any form of Scripture and 1.5 billion people still are unable to read the full Bible in their own language. ABS said its goal is to translate scripture into 100 percent of the world’s living languages by 2033.