Home / Adoption/Foster News / Deanna and the miracle of finding Gus 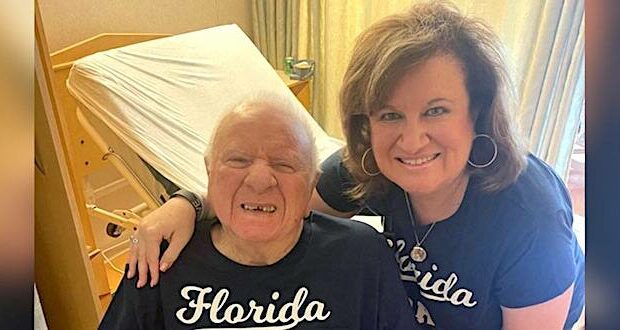 Gus is grateful to finally connect with his daughter Deanna Shrodes.

After decades of fruitless searching for her biological father, Deanna Doss Shrodes expected that if she ever found him, it would be at a grave marker. When her mother died without revealing any information, Deanna wondered if she ever would secure answers.

After two months in foster care, Deanna had been adopted as an infant in 1966. While she is thankful for the family that raised her, like many adoptees, she wondered about her biological parents. She reunited with her birth mother in 1993 and they kept in contact until her mother’s death in 2013. The search for her father, however, did not go as well. Her mother took the man’s name to her grave, and an exhaustive search of historical and genealogical records in the birth city of Richmond, Virginia, produced nothing. DNA testing indicated strong likelihood of Greek ancestry, but no definitive leads resulted.

During the years of searching, Shrodes, now 55, completed her Master in Leadership and Doctorate in Ministry from Southeastern University in Lakeland, Florida. She serves in ministry alongside her husband of 35 years, Larry, who pastors Celebration Church in Tampa.

A decade ago, Shrodes prayed specifically for the Holy Spirit to reveal the name of her biological father. During several prayer times, she strongly sensed God telling her the name: Gus.

A team of “search angels” — volunteers who assist adoptees by following up on leads received via DNA testing or other sources — pitched in to help. They checked out every Gus around her mother’s age who had lived in or near Richmond in the 1960s. Several on the search team remained in touch and interested in the case, which more than one DNA expert considered one of the most difficult ever encountered.

Larry Shrodes felt bad for his wife’s many disappointments but says the many kindnesses of others encouraged them to keep going.

“It’s amazing how many people the story touches,” he says. “There is legitimate pain in so many lives, but this shows God cares and is involved.”

In 2014, Deanna reached out to a family member on her mother’s side, hoping the relative might be more open since her mother’s death.

“My memory is not what it used to be,” came the woman’s reply, “but I think his name was Gus.” The confirmation encouraged Deanna, but the continued searching yielded nothing — for the next eight years.

“I tried to be happy for other adoptees whose prayers were answered,” says Shrodes, “but inside I wondered if it would ever happen for me. I had to learn a whole new level of God’s love, care, and guidance.”

Some of that care came through counseling, to deal with unhealed wounds including her mother’s refusal to share the secret. Shrodes also credits friends like Gayle Lechner, who serves as administrative assistant at Celebration Church, in addition to being a search angel. Every year during Christmas Eve Communion, Lechner prayed with Deanna, saying, “Hopefully next year will be the one we don’t have to pray this prayer anymore.” Having been interested in genealogy for years, Lechner got involved in the search in 2012.

“Every time we prayed, I specifically asked God to help us avoid wrong leads and rabbit holes,” Lechner says. “There is no way to do a search like this in one’s own power. I’ve just been doing what God called me to do, praying with Deanna, but also encouraging her to take a break occasionally.”

On May 11, 2022, a breakthrough came. During a leadership cohort meeting on Zoom, associate pastor Stephanie L. Smith of Shoreline Community Church in Washington state asked group members to write out personal questions to the Lord. Even after years without results, the first question Shrodes wrote was, Lord, will you please help me find my father? Unknown to her at the time, another participant, Kristi A. Hahn of Crossroads Community Church in Avon Park, Florida, wrote, Will you help Deanna find her father?

As the online meeting ended, Shrodes saw a message from an excited search team member, Regina: “You’ve got a close Greek paternal match!” Sure enough, logging in to “23 and Me” showed a Greek first cousin match on the X chromosome. Since X chromosomes must come from a male’s mother, eliminating the only close relatives on her mother’s side, the percentages confirmed the relationship and Deanna quickly reached out online to the male cousin.

He responded by calling from Greece, saying he had known she existed, but he had no identifying details to find her. She learned some of the other side of the story, including some key information: Her father is Greek, still alive, and living in Richmond. And his name is Gus.

Gus is 91; although searchers reached out 10 years each way, the actual age difference with Deanna’s mother was 16 years. Since that written prayer and the search notification, followed by a paternity test confirming Gus is indeed Deanna’s living biological father, a relationship developed over several trips to Virginia. They met in person for the first time on May 20, along with Larry and, via FaceTime, the couple’s three children and grandchild.

The journey since May has not been without complexities. Gus had been placed in a rehabilitation/nursing facility after a wellness check requested by his doctor. Having always been self-reliant and successful in business ventures, Gus processed the loss of his independence while simultaneously learning he had a daughter. The first in-person visit proved extremely emotional.

Gus never married and has no other children. Thus, he had no family to advocate for him as his health deteriorated. While building a relationship with Gus, Deanna got busy, with help from an elder law attorney, securing documentation and power of attorney to assist with needed medical and legal decisions. Several supportive medical staff at the facility, plus Gus’s doctors, expressed gratitude that the lonely elderly man had made a vital connection.

Another miracle occurred during that first visit, one of eternal value. As Gus struggled to express his conflicted emotions, Deanna told him, “I don’t know how much time we will have together on earth, but we can spend eternity together. But that’s your choice.” Gus responded, “I want to make that choice,” and his newfound daughter presented a simple gospel message and led him in prayer.

“I never had any peace in my life before,” Gus says of his new relationship not just with his daughter, but with Jesus Christ. “Now I know peace. I’m not alone anymore.”

Deanna landed rather suddenly in the maze of elderly parent health care and other decisions. Following some arduous legal work, she started organizing Gus’s personal and medical affairs. And, with friends praying every step of the way, Deanna and Larry moved Gus on July 26 from the rehab facility to their home in Florida, where she has assembled a care team.

Eventually, there will be a trip to meet Greek cousins, but for now, it’s one day at a time. The rehab center medical staff, whom Deanna calls angels in disguise, gave her a crash course in helping Gus with meals, personal care, and medications. But there’s a lot to manage.

“It’s a huge learning curve, obviously, as I’m completely new at this,” she says. “But I’m so thankful for the outpouring of support.”

A big part of that support, of course, is her husband. It’s not the first time the couple unexpectedly expanded their household, having cared for an infant great-niece full-time for her second year of life and continuing to be a supportive influence in the 8-year-old girl’s life. Of that journey and now this one, Larry says, “We just want to model Christ, whatever that looks like.”

“I always knew it would be a big change emotionally if I found my father, even if it was at a grave,” Deanna says. “All this shows how much the Lord loves me and has heard the cries of my heart.”

As for Gus, even in the whirlwind of change, he agrees God is in control.

“I definitely do believe it was God that helped her to find me,” Gus says. “It was a miracle.”

Previous: Stalin and the “Night of the Murdered Poets”
Next: ‘The Greatest Showman’ remains a favorite