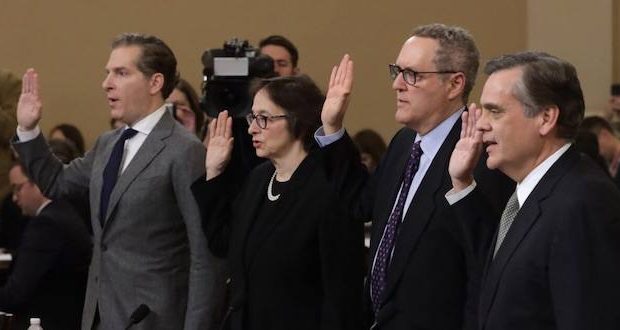 The four witnesses included three Democrat anti-Trump law professors (left) while Republicans were allowed one witness. Jonathan Turley (right) is a registered Democrat and respected liberal Constitutional expert who says Democrats are the ones obstructing justice.

Doubling down on testimony that was not going well for the Democrats, one of their witnesses took advantage to drag in 13-year-old Barron.

“The Constitution says there can be no titles of nobility,” said Prof. Pamela Karlan of Stanford Law School. “So while the president can name his son Barron, he can’t make him a baron.”

While the comment drew laughter from many of the Democrats on the committee and their supporters in the gallery, it was immediately condemned by Republicans and even moderate Democrats, shocked that the Democrat witnesses hit such a low point.

First Lady Melania Trump shot back on Twitter saying in a fiery tweet, “A minor child deserves privacy and should be kept out of politics. Pamela Karlan, you should be ashamed of your very angry and obviously biased public pandering, and using a child to do it,” the first lady said in a fiery tweet aimed directly at Stanford Law professor Pamela Karlan, an impeachment witness for House Democrats.

A minor child deserves privacy and should be kept out of politics. Pamela Karlan, you should be ashamed of your very angry and obviously biased public pandering, and using a child to do it.

“Let me also suggest that when you invoke the president’s son’s name here, when you try to make a little joke out of referencing Barron Trump, that does not lend credibility to your argument,” said Rep. Matt Gaetz (R-FL). “It makes you look mean.”

Karlan later gave what many saw as a half-hearted apologized. “It was wrong of me to do that,” she admitted on the witness stand, before again attacking President Trump.

Karlan, along with the other two Democrat witnesses have been discovered to be leftist political activists with a long history of tweets and videos in which they disparage the Trump family and white supporters of the President. A video of Karlan emerged of her saying she even refuses to walk on the sidewalk in front of the Trump Hotel in Washington while some videos show her attacking Christians and other Trump supporters.

The exchange between Karlan and Congressman Gaetz was one of several tense moments in the very first public impeachment hearing. The televised proceedings came after months of meetings that were closed to the public – something Republicans said was an in justice to the American people and a fair process.

Lawmakers heard from Karlan and three other university professors on what constitutes “high crimes and misdemeanors.” Democrats called three witnesses while allowing Republicans to call just one.

The experts brought in by Democrats argued that the Ukraine phone call is proof President Trump abused his power for personal political gain. All three believe he should be impeached but asked if they had any personal knowledge of specific allegations, none could answer affirmatively.

“President Trump’s conduct as described in the testimony and evidence, clearly constitutes impeachable high crimes and misdemeanors under the Constitution,” said Prof. Noah Feldman of Harvard Law School. Feldman called for impeachment as early as Trump’s first few months in office arguing at the time that one of Trump’s tweets was an impeachable offense.

However, during the proceeding he testified under oath that the first time he considered impeachment for Trump was in July of this year. While the lie went uncontested by Republicans on the committee, conservative analysts were quick to point it out later in the day.

The one witness that Republicans were allowed to call is a registered Democrat and well-respected liberal lawyer and constitutional scholar. Jonathan Turley of George Washington University Law School repeatedly testified that based on the evidence the Democrats have presented, the impeachment efforts are baseless. He argued forcefully that Democrats are moving too fast and have not proven their case. Truly went so far as to say that there has been “obstruction of justice” but that it is by the Democrats on the committee, not by President Trump.

“Trump has followed the process,” Turley said of the President going to court, while the Democrats have attempted to prevent him.

“It’s wrong because this is not how you impeach an American president,” said Turley. “Why would you want to set the record for the fastest impeachment? Fast is not good for impeachment.”

Turley, who said he voted for Obama and Clinton, noted that he’s not a fan of Trump, disagrees with him on numerous issues and didn’t vote for him. The statements, his public record and non-partisan testimony made him the most credible witness according to court experts.

“I get it. You are mad. The President is mad. My Democratic friends are mad. My Republican friends are mad. My wife is mad. My kids are mad. Even my dog is mad….We are all mad and where has it taken us? Will a slipshod impeachment make us less mad or will it only give an invitation for the madness to follow in every future administration? That is why this is wrong,” Turley said in his passionate remarks.

Turley argues the Democrats’ case against Trump is being rushed and the evidence is flimsy at this point.

Overseas at a NATO where Trump secured a commitment of an additional $400 billion dollars from Nato allies to pay their fair share of the defense of Europe, the president also made time to criticize the fairness of the proceedings.

“They get three constitutional lawyers and we get one. What’s that all about?” he told reporters. “We had no representation. We couldn’t call witnesses. We couldn’t do anything. It is the most unfair thing that anybody’s ever seen.”

“When it’s partisan like this and you want to move public opinion, you can’t be more partisan,” he said. “You have to somehow figure out a way to get more of the public on your side. They didn’t do that.”

After Wednesday’s hearings, several more Democrats, even some on the committee, voiced hesitation at proceeding with impeachment. This after months of calling for it.

It’s believed the closed door proceedings, the rush of the process and the way Republicans have been treated, have increased the public’s alarm at Democrat actions and soured them even more on impeachment. Recent polls show support even among Democrat voters for impeachment is dropping.

The White House has until the end of Thursday to decide if it will participate in any of the next hearings. A full House vote is expected before Christmas.