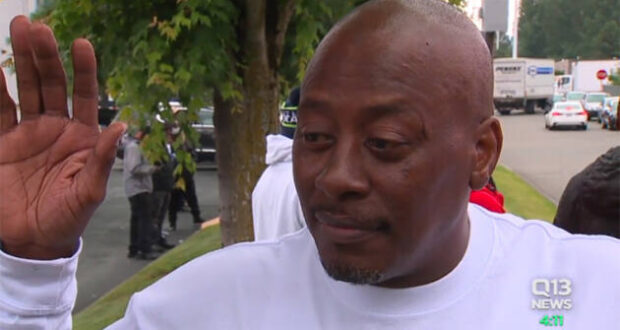 Anderson said he still doesn’t know who killed his son, Horace Lorenzo Anderson Jr., who went to CHOP in the early hours of June 20.

“Incredibly, Donald Trump called me,” Anderson, 50, told Fox News affiliate Q13 outside the funeral home in Kent, California, where his son was buried. “The president of the United States called me today. He gave his condolences, and me, I’m not a political guy. I told him, ‘Nobody like you.’ I’m real. Donald Trump called me and he didn’t have to call me.”

After the younger Anderson and another victim were shot at Cal Anderson Park, police were called into the zone but were met with crowds of hostile protesters (video) as they attempted to enter and clear a path for paramedics to treat and transport Anderson. Instead, so-called CHOP medics drove the gunshot victims to Harborview Medical Center. When officers arrived at the hospital, they were informed that Anderson had died and the second victim had sustained life-threatening injuries.

“I haven’t been able to sleep. I wake up in the middle of the night. I go look for him. He ain’t there,” Anderson said of his son, who unbeknownst to him had left their house that night to go to CHOP with friends.

While Durkan hadn’t called Anderson, she had referenced the killings of his son and that of a 16-year-old who was fatally shot by CHOP security when they reportedly fired “300 rounds” at a Jeep the teen had driven into barricades at the zone. A 14-year-old passenger was also wounded in the incident.

Durkan, who was criticized for allowing lawlessness to continue inside CHOP and accused of only taking decisive action to clear the area after protesters demonstrated outside her home, issued an executive order to shut down CHOP last Wednesday.

Police Chief Carmen Best told Q13 that she would be reaching out to Anderson’s family and looking into why he hadn’t been personally contacted by anyone at the department. Best explained that standard procedure is that the medical examiner contacts the next of kin and the police department’s victims’ advocate unit reach out to the victim’s family to assist them after their loved one’s death.

In his first national TV interview, held with Fox News opinion host Sean Hannity Wednesday night, Anderson broke down in tears as he described how his impressionable son was easily convinced to go to CHOP despite the risks. He also expressed the heartache he feels knowing his son’s killer is still on the loose.

“I’m numb, I’m still numb today,” Anderson said. “I got to bury my son tomorrow. It’s just been a lot going on. My whole thing, my whole life, man, this is incredible. To this day, it’s been almost two weeks, I haven’t heard from nobody. Has nobody called. Ain’t nobody called me or tried to find me. His I.D. is my I.D., so his number is my number, so it’s easy to come for — the detectives to say, excuse me, knock on my door, excuse me, let me tell you what happened about your son. I don’t know nothing. I had to find my son. They wouldn’t even let me see my son that night. It took me a whole week before I could see my son.

Anderson also said he wasn’t aware that police and paramedics had attempted to enter Cal Anderson Park to treat and transport his son to the hospital but was already moved from the scene by protesters.

The sentiments expressed by Anderson of not being contacted by Democrat officials and black ommunity leaders were similarly expressed by Angela Underwood-Jacobs, whose brother, Dave Patrick Underwood, was gunned down in a targeted attack during riots in Oakland, California, on May 29 as protests arose nationwide following the police-involved death of George Floyd in Minneapolis, Minnesota.

Underwood, 53, who was an officer in the Department of Homeland Security’s Federal Protective Service, was killed as he stood guard outside the Ronald V. Dellums Federal Building and U.S. Courthouse. A second officer at the scene was also shot and critically injured.

Underwood-Jacobs, who testified alongside Philonise Floyd, the brother of George Floyd, at the House Judiciary Committee Hearing on Police Reform at Capitol Hill on June 10, lamented that her brother’s murder hadn’t received equal attention from the media as Floyd. She also said that national black leaders hadn’t reached out to her family to offer either their help or condolences.

“It feels as though there is a difference in life,” added Underwood-Jacobs, who was the first black woman to be elected to the city council of Lancaster City, California, in an interview with Fox News host Martha McCallum last month.

“Meaning that, on one hand, George Floyd and my brother’s situations are very different,” she continued. “At the same time, they are both African-American men. There has been so much talk regarding George Floyd and his family, which is fine. However, I think at the same time, my brother should be recognized as well, for literally going into work every day and putting his life on the line for us. And it saddens me that his memory hasn’t been as prevalent in the news as I think that it should be.

“Not only that, I have not received any calls from anyone of color who are leaders in the country. And I’m wondering, ‘Why didn’t I get a phone call?’ Why hasn’t anyone reached out to our family to see how we’re doing and how they could be of assistance. It’s been tough.”

The alleged suspect in Underwood’s killing, Air Force Staff Sgt. Steven Carrillo, 32, was apprehended on June 16 and charged with murder and attempted murder in the drive-by attack. Carrillo and a second man had traveled to Oakland with the intent to kill police, the Department of Justice said.

Suspects involved in CHOP murders remain at large and the Seattle Police Department is urging those with information to call the Violent Crimes tip line at (206) 233-5000.

Previous: Death of megachurch pastor near St. Louis ruled a suicide
Next: Study: Easily offended are bad employees and hypocrites