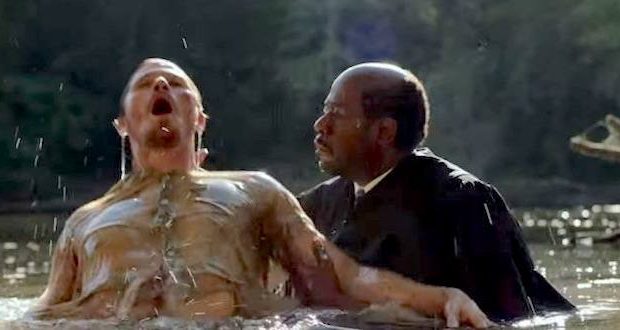 A gripping new film hits select theaters in February and it’s already getting excellent reviews. “Burden,” is a ground-breaking story of former KKK member whose life was transformed after forming a friendship with a black preacher he once planned to assassinate.

101 Studios, which distributed it, has promised Kennedy it’ll help repair and reopen the theater. They have created a website to accept donations and tell more people about the project.

Releasing in select theaters Feb. 28, the film follows the true story of Michael Eugene Burden Jr., who in 1996 opened the Redneck Shop and Klan Museum in Laurens, South Carolina, displaying KKK paraphernalia, including white-hooded Klan uniforms and photographs of lynchings.

However, after meeting a woman who persuades him to leave the KKK, Burden renounces his Klan membership and sells his store to the Rev. David E. Kennedy, a black pastor whose own uncle was lynched by the KKK.

Burden’s decision to sell his store infuriates Klan members, who seek vengeance. Because the KKK holds tremendous power over the small town, Burden soon finds himself jobless and penniless.

READ: 5 things not to miss

Despite his own misgivings, Reverend Kennedy, the pastor of New Beginnings Church, decides to shelter him, his girlfriend, and her son. In doing so, the pastor and community members set aside their own misgivings in hopes of teaching the former clan member about love and acceptance. Thanks to the pastor’s kindness, compassion, and grace, Burden embraces Christianity and is baptized.

A trailer for the forthcoming film shows the moment Reverend Kennedy embraces Burden, telling skeptical community members, “I view him as a brother in Christ.”

However, the pastor’s decision to help Burden leave behind his violent pastor sets him on a collision course with the manipulative KKK leader Tom Griffin, who presides over frequent gatherings of young clan members.

The film was produced by Robbie Brenner & Bill Kenright, and was written and directed by Andrew Heckler.

“Burden” is based on Courtney Hargrave’s 2018 book, Burden: A Preacher, a Klansman, and a True Story of Redemption in the Modern South.

The film is rated R for violence, as it depicts the violence KKK members perpetrate against Burden and Reverend Kennedy.


Watch the trailer below.