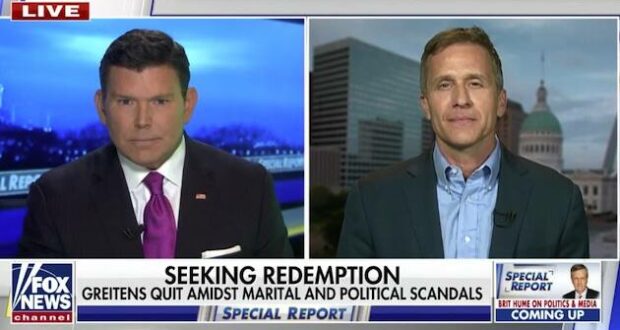 Eric Greitens is back. The former Missouri governor, who resigned amid a scandal, announced on Monday that he will run for the U.S. Senate seat being vacated by Republican Roy Blunt.

“The people of Missouri need a fighter in the U.S. Senate. They need somebody who is going to go — as I will, as I am committed to do — to defending President Trump’s ‘America First’ policies and also to protecting the people of Missouri from Joe Biden, Nancy Pelosi and Chuck Schumer’s radical leftist agenda.”

The interview provided an awkward moment as Baier reminded Greitens that the sex scandal involved a naked and bound woman in his basement with the woman saying it was without her consent. Video Below:

The Missouri Ethics Commission initially levied a more than $178,000 fine against Greitens last year after finding two campaign finance reporting violations but agreed to a $38,000 settlement. The two violations were failure to report in-kind contributions by the Greitens for Missouri committee. One stemmed from the LG PAC’s media buy; the other pertained to polling data paid for by A New Missouri. Despite the reporting violations, Greitens and his legal team insisted the former governor had been exonerated. He repeated that belief on Fox News Monday.

Greitens is a native of St. Louis and was a registered and active Democrat before switching parties to run for governor in 2015. After beating three other Republicans in the primary election, he defeated Chris Koster in the general. He served less than two years before he resigned while facing a possible impeachment.

Previous: Home sales dip as uncertainty grows over taxes, spending
Next: Israel goes to the polls, will Netanyahu survive?