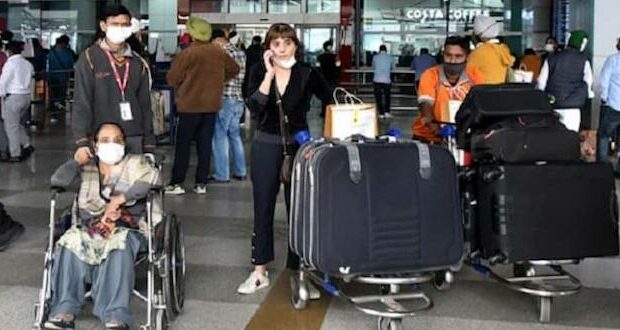 Passengers wait for transportation outside a South African airport.

A new study provides some good news in the pandemic. Omicron has a 91% lower chance of causing death than the Delta variant of COVID-19 with few deaths worldwide.

The study, which was conducted by Kaiser Permanente Southern California, also showed that people with Omicron infections are 74% less likely to need to be placed in the intensive care unit (ICU). And the study found a 53% reduction in risk of being hospitalized, said Rochelle Walensky, director of the Centers for Disease Control and Prevention (CDC).

“The duration of hospital stays was approximately 70% shorter, with the median of stays being 1.5 days for Omicron, compared to about five days for Delta,” Walensky said on Wednesday. “Looking at all hospital admissions for Omicron, 90% of patients were expected to be discharged from the hospital in three days or less.”

But Walensky said we’re not out of the woods yet. “While we are seeing early evidence that Omicron is less severe than Delta, and that those infected are less likely to require hospitalization, it’s important to note that Omicron continues to be much more transmissible than Delta,” she said.

The study looked at 52,297 Omicron cases and 16,982 Delta cases that occurred across Southern California between November 30 and January 1. No patients with Omicron required mechanical ventilation, the study found.

Omicron has nearly taken over from Delta. “Health officials reported Tuesday morning that Omicron now accounts for an estimated 98 percent of COVID cases in the U.S., up from 95 percent last week, and meaning that nearly all cases in the U.S. are of the strain that was only discovered months ago,” The Daily Mail reported on Tuesday.

The U.K. paper said there was also good news, noting that “signs are pointing to the variant slowly losing steam and peaking in the next few weeks, if other former hotspots around the world are any indication.”

Over the past week, the U.S. has averaged 767,000 new cases per day — the most since the pandemic hit in February 2020. Before Omicron arrived, the average was just more than 235,000 cases, meaning confirmed cases have tripled, The Mail reported.

Cases rose by 27% since January 3 and deaths this week rose by 12% over the same period, according to a Daily Mail analysis of Johns Hopkins University data.

Omicron took over in just a matter of weeks. At the beginning of December, the variant accounted for less than 1% of sequenced cases, with Delta making up 99% of them. By the week ending on Christmas Day, the Centers for Disease Control and Prevention (CDC) estimated the variant to be 58.6% of all new cases.

While data are still being studied for the fast-moving variant, some researchers say Omicron taking over could be good news. Scientists at the Africa Health Research Institute in Durban, South Africa, recently conducted a small study that found people infected with Omicron — and especially those who have been fully vaccinated — developed a higher immunity to Delta.

Now, South Africa has announced that it has passed its peak and the numbers are falling rapidly there and across Africa.

If this trend continues, the World Health Organization says it will mark the shortest-lived surge so far on the continent. Abdou Salam Gueye is Director of Emergency Preparedness and Response in WHO’s Regional Office for Africa. He says it is premature to let down one’s guard as the latest data was collected during the holiday period, when numbers tend to be under reported.

Anita Graham is in the Department of Pulmonology, University of Witwatersrand, South Africa. She says the Omicron variant has accounted for 95-percent of all infections during the region’s huge fourth pandemic wave. However, she says there have been far fewer severe cases, hospitalizations, and deaths than from the more virulent Delta strain.

–Joseph Curl has covered politics for 35 years, including 12 years as White House correspondent, and ran the Drudge Report from 2010 to 2015.  DailyWire.com | Reprinted with permission.

Previous: Ethical issues with technology to watch this year
Next: Why Nigeria’s Christians feel abandoned by the United States