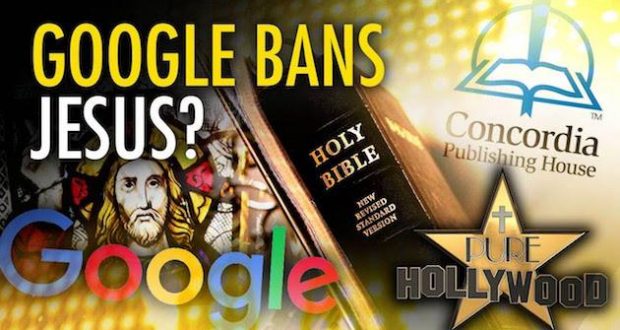 More evidence of Google restricting religious speech came to light today as the head of a Lutheran publishing house claimed Google will no longer accept advertisements related to the organization’s website “because of the faith we express.”

The incident comes on the heels last week after the information giant admitted it was labeling Republicans as Nazis in its online dictionary.

Bruce Kintz, CEO of Concordia Publishing House — an entity of the St. Louis-headquartered Lutheran Church-Missouri Synod, took to his Facebook page on Monday to voice outrage after the organization had been told that the Google’s online advertising service will not promote the CPH website because of certain religious items on the page.

Kintz’s Facebook post explains that he was told by an associate earlier in the day that “Google ads will no longer accept anything related to the cph.org domain.”

“They stated that the reason is because of the faith we express on our website,” Kintz wrote.

More specifically, a Google AdWords support representative told CPH that references to Jesus and the Bible led to the disapproval of its ads.

“[A CPH staff member] was told, as an example, that things like our bible challenge on our VBS webpage would clearly need to come down before they could consider us for ads,” Kintz said.

He argued that the news was “incredibly sobering and disappointing.”

“It is an uphill battle but our mission and customers are worth it,” he stressed. “It is why we are here.”

However, in order to “protect user privacy,” Google AdWords has policies in place “that restrict how advertisers may use data to show and personalize ads to users.”

“We prohibit advertisers from using sensitive data such as race, religious affiliation, political affiliation or sexual orientation to show ads to users,” a statement from Google reads.

A review of Google’s advertising policies show that the company prohibits the use of “personal religious belief” to target users for advertising.

“We want ads to provide a positive experience and to be informed by users’ interests rather than by who they’re perceived to be as a person, so we don’t allow personalized advertising based on a user’s fundamental or intrinsic self-identity or their belief systems,” the policy states. “Such identities and beliefs can include inherently private classifications of one’s self; classifications susceptible to stigmas, discrimination, or harassment; membership within groups that are susceptible to stigmas, discrimination, or prejudices; and personally held belief systems.

“Advertisers can’t use identity and belief categories to target ads to users or to promote advertisers’ products or services.”

According to Concordia Publishing House, the ads that were disapproved by Google were what’s called Remarketing ads. Google defines this as showing “ads to people who’ve visited your website or used your mobile app. When people leave your website without buying anything, for example, remarketing helps you reconnect with them by showing relevant ads across their different devices.”

CPH was told to remove all items that refer to Jesus or the Bible in order to proceed to use the remarketing ads or use a different type of Google ad product.

Kintz said they will not “sacrifice” their beliefs to comply with Google’s requirements.

“It’s no secret that society is becoming increasingly hostile to the Christian faith. This increasing hostility makes our mission of proclaiming that faith through the books, Bibles, and curriculum that we produce all the more important,” he stated. “We will continue to proclaim the faith because we know without a doubt that the Word of the Lord endures forever.

“It continues to be CPH’s mission to share God’s Word with all Christians who are seeking faithful resources to support their faith. CPH will not be deterred by Google’s actions in this instance but will seek all available avenues to connect people to Christ.”

The news comes as many are accusing Google and other tech giants such as Twitter and Facebook of having a liberal bias and suppressing the reach of conservatives and Christians.