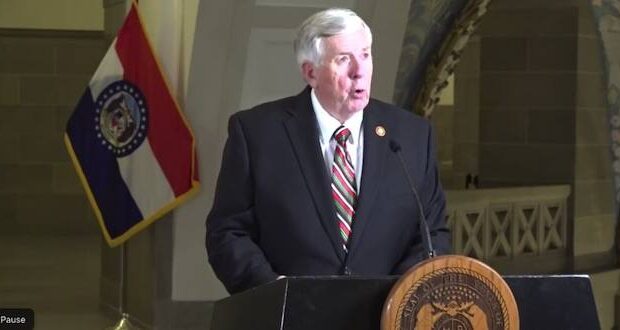 Gov. Parson issues 24 pardons, calling it ‘the time of year for forgiveness’

Missouri Gov. Mike Parson on Monday issued 24 pardons to individuals who have demonstrated a changed lifestyle and desire to move on from past behaviors.

“If we are to be a society that believes in forgiveness and second chances, then it is the next chapter in these individuals’ lives that will matter most,” he said. “We are encouraged and hopeful that these individuals will take full advantage of this opportunity.”

These are the first pardons granted by Parson through authority granted him by the Missouri Constitution, Article IV, Section 7. Official pardon documents have been filed with the appropriate government agencies and are being sent to the individuals.

In addition to these pardons, Parson has decided to commute three prior drug offenders to house arrest. These offenders were made parole ineligible by a statute that later was repealed by the Missouri General Assembly. Missouri Supreme Court case law holds that the repeal of the statute did not legally apply retroactively to these offenders.

“These offenders would not be subject to a legal bar for parole eligibility if sentenced today due to the repeal of the prior statute by the General Assembly,” he said. “They have all been active participants in programming, completed numerous restorative justice hours and demonstrated good behavior while incarcerated.”

After a home plan is approved by the parole board, the three offenders will serve the remainder of their prison terms under supervised house arrest. The Missouri Department of Corrections has notified the offenders receiving this commutation. Parson also decided to commute the sentence of a female drug offender

He has instructed his legal team to continue reviewing clemency files and intends to keep working to reduce the backlog inherited by his administration. At last report, there were 3,695 pending clemency applications.

“This is the time of year for forgiveness,” Parson said. “There must be serious consequences for criminal behavior, but when individuals demonstrate a changed lifestyle and a commitment to abandoning the ways of their past, they should be able to redeem themselves in the eyes of the law.”

Among the prisoners seeking clemency is Patty Prewitt, 71, who is serving a life sentence at the Chillicothe Correctional Center after being convicted of murdering her husband, Bill Prewitt.

According to a brief sent to the governor’s office, Prewitt maintains her innocence after serving 34 years in prison. Her attorneys say her conviction was flawed, including the use of a discredited forensic expert and a failure to pursue leads to corroborate Prewitt’s account.

Other petitioners include Mary Pickard, 72, who has served more than 20 years in prison. She was convicted of first-degree murder and was sentenced to life without parole. A brief sent to the governor’s office said she was not directly involved in her husband Michael W. Pickard’s  death, and that he traumatized and abused her.