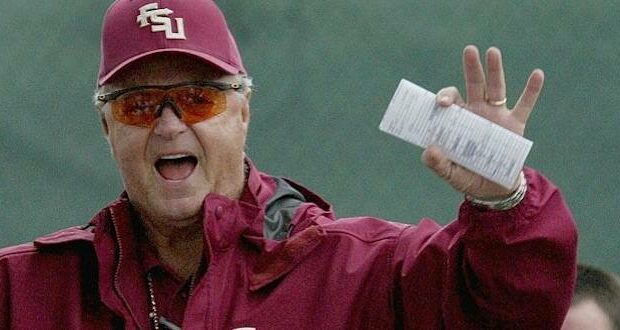 Bobby Bowden, the Hall of Fame college football coach who died last week, will be remembered as much for his faith as for his success on the field.

Bowden coached Florida State from 1976 to 2009, winning two national championships and 12 conference titles, and also tallying a record 14 consecutive seasons finishing in the Associated Press Top 5. His 389 victories ranked second all-time among major college coaches. He was inducted into the College Football Hall of Fame in 2006.

He exhibited a folksy wit and warm charm to players and media members alike. He often spoke in churches and at faith-based events, both before and after retirement.

“If we don’t go out and talk about Jesus, how is the world going to know?” Bowden said this year during the Southern Baptist Convention annual meeting. He appeared at the SBC alongside former coach Mark Richt, whom he helped lead to Christ during the 1980s.

Coaches, he said, can have a major impact on a player’s life.

“Rev. Billy Graham said, ‘A coach can influence more people in a year than a preacher can in a lifetime,'” he said in 2017. “And, for the most part, I agree with that. But it can be a good or bad influence.”

In 2017, Bowden cowrote a book and appeared in a documentary discussing his faith-centric view of football. Both were called “The Bowden Dynasty” (below).  Former Florida State quarterback Danny Kanell tweeted of Bowden’s success, “Coach Bowden’s legacy is far more about his faith than his football career.”

The numbers are insane but they pale in comparison to the number of lives Bobby Bowden impacted for eternity.

He was more preacher than coach.
More father figure than mentor.
More friend than teacher.

Bowden announced in July that he had terminal cancer. Richt, a friend of Bowden’s, said the former coach was at peace.

“He said that because he knows where he’s going and had the peace that surpasses all understanding,” he said. “There’s no fear in death. People who live the faith understand that. Our time on earth is a blink of an eye. I’m happy for coach, because I know he’s going to heaven. God is not going to ask Coach Bowden how many championships he won, he’s going to ask, `what did you do with those young men I put under you?

Metro Voice is an Amazon Affiliate and your browsing items mentioned in stories can support us.

Previous: Poll: Biden has lost support of public over Afghanistan
Next: 1776 Curriculum released to counter narrative being pushed by the Left