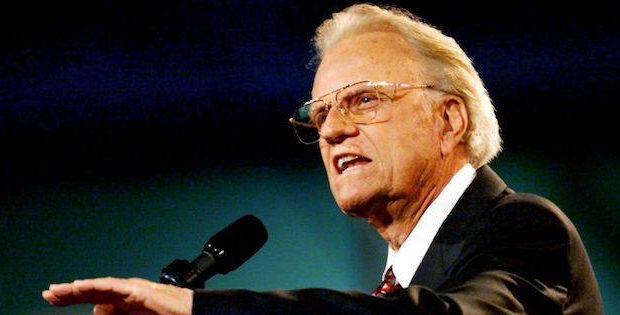 Although Billy Graham died before the tumultuous year of 2020, his words about suffering and armageddon are as timely as ever.

He examined the topic of suffering in his 1981 (see below) book, “Till Armageddon.” This book is being reprinted with a new title, “Who’s in Charge of a World That Suffers?” and an introduction by his son, Franklin.

“God, no question, is in charge,” Franklin Graham says. “But we also know that the world in which we live is a fallen world. And the god of this age is Satan. And we know that he controls so much of what is going on in the world, he bad things that are going on.”

It’s also a world where the COVID-19 has has been found in more than 300,000 Americans that have died in the last 10 months.

“Never in the history of mankind has the world been locked down,” he said. “It’s never done that. We’ve never taken healthy populations and locked them down. It’s always been sick people that we locked down. And we look at COVID and not only what it’s done to the world but what it’s done to families. We’ve had it in our family. And we’ve had it in our organization. Family members have died as a result of COVID. It’s touched every country in the world. It’s touched almost every part of our society.

“And how do we deal with it? How do we handle it? And this book, I think, is just tailor-made for the problems that we are facing today.”

READ: Will workers be forced to take the Covid vaccine?

Graham suspects the world is beginning to enter the time in the Book of Revelation.

“When we read the scriptures, I believe we are probably approaching the first chapters of Revelation,” he said. “Things are happening so quickly. The world is changing so fast, the world that hates God and has turned its back on Him.

“This I think is an exciting time. It’s not something we should be afraid of, but we need to know that God is still in charge and that he writes the last pages of history. It’s not going to be the Republican Party, the Democratic Party or the United Nations. The Lord Jesus Christ comes back and establishes his kingdom. And for those who put their faith and trust in him, we know that our soul will be secure in his hands.”

READ: Valley where armageddon will occur included on tour

Metro Voice is an Amazon Associate. Check out Graham’s original release of his book here: