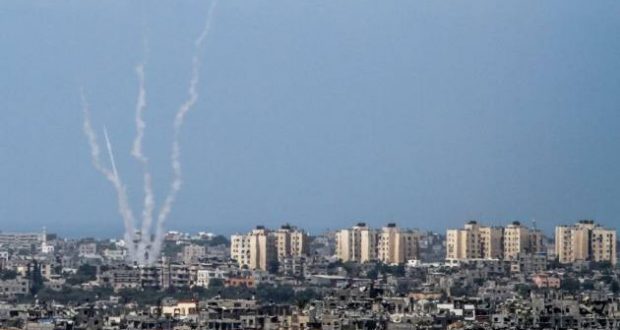 Missiles are fired from Hamas-controlled Gaza City into Israel. Hamas fires its rockets from heavily populated areas in an attempt to prevent retaliation.

Hamas fires over 400 missiles into Israel

JERUSALEM, Israel – More than 400 missiles have been fired into Israel from Hamas-controlled Gaza yesterday and overnight. It was the largest attack on Israel by missiles in one day ever.

Israeli Prime Minister Benjamin Netanyahu cut short his visit to World War I memorial ceremonies in Paris to address the deteriorating situation in the Gaza Strip. Some see the border on a knife’s edge between calm and a full-scale war.

Israeli officials closed schools next to the border after Hamas fired rockets into Israel. The terror group launched at least 400 rockets over a span of several  into Israel’s southern border.

According to the IDF, a total of 200 rockets were fired into Israel by mid-evening. The military said it intercepted 60 rockets, while most of the others fell in open spaces.

The missiles set off a large fire near a shopping center in Sderot, hit several homes, and an anti-tank missile destroyed a bus. The bus attack critically wounded a 19-year-old soldier and injured several others.

One Israeli resident was killed in his apartment. Six other people were lightly wounded by shrapnel in various attacks, medical officials said.

“We continue to strike and retaliate against the military targets belonging to terrorist organizations in Gaza, and as for our intentions we will enhance these efforts as needed,” he told reporters.

Michael Oren, former Israeli ambassador to the US, said Israel “will do whatever it takes” to defend itself. “We expect the world to stand with us,” he said.

The rocket barrage followed a firefight between an IDF Special Forces unit and Hamas troops near Khan Younis in southern Gaza. One IDF officer was killed and another severely wounded. The IAF airlifted the injured officer to Soroka Medical Center in Beersheva, where he is in stable condition following emergency surgery.

Seven Hamas terrorists, including two senior commanders, were killed in the assault.

The identity of the slain officer remains classified, with the IDF and Defense Department referring to him as Lt. Col. M (for the Hebrew letter mem).

Israeli Defense Minister Avigdor Lieberman said the details of the mission would remain classified for years.

“An IDF Special Force operated tonight in a very meaningful operation to Israel’s security. The force and IAF (Israel Air Force) troops fought a brave battle calmly and heroically. I salute our troops. The IDF owes Lt. Col. M more than we can say. I embrace his family and wish the injured officer a quick recovery.”

While in Paris, Netanyahu said there was no possibility of a peace deal with Hamas, comparing it to one with ISIS.

Netanyahu added that Israel is the ‘finger in the dike’ for Europe.

“Israel is Europe’s shield in the Middle East; it’s as simple as that. If we were not there, then radical Islam would spread and push here many other people. And the fact that Israel is there, if Israel were not there, this is what would have happened,” he said.

“The fact that Israel is there is not like we are only filling a physical space, but we do much more than that, a lot more than that,” he continued. “We do it first and foremost for our own protection. I do not want to mislead you, but when we defend ourselves, we also defend Europe and I expect a change in Europe’s approach toward us.”

Netanyahu says he wants to avoid a needless war and even facilitated a transfer of $15 million from Qatar to pay civil servants’ salaries in Gaza.

While the ongoing fighting threatens to erupt into a full-scale war, the UN and Egypt are trying to broker a ceasefire. Their attempt follows months of Hamas-led riots on the Gaza border and arson balloons that have burned an estimated 10,000 acres of Israeli farmland, nature reserves, and forests.

On Sunday, a terrorist succeeded in infiltrating the border and set fire to a greenhouse. IDF forces caught the infiltrator, who is being questioned by the Shin Bet (Israel Security Agency).

Previous: Missouri’s medical marijuana: what it means
Next: Royals to again serve meals to homeless