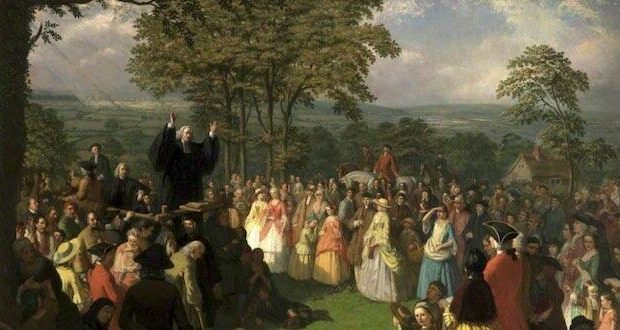 History: Whitefield and the Great Awakening laid groundwork for revolution

George Whitefield’s second trip to America in 1740 was one of the most important events in American history. Spiritual revival had started in different areas and denominations throughout the colonies: “The Great Awakening” had started. Whitefield came on the scene with his simple message—“you must be born again.”

With his unmatched oratory skills and his dramatic flair–it was like throwing gasoline on a fire. It exploded. One writer said, “The effect was electric. Crowds responded with outpourings of emotion. People cried, sobbed, shrieked, swooned and fainted. All of New England, it seemed, was seized by a spiritual convulsion.”

He spoke in virtually every major town in America from Maine to Georgia. Thirty percent of everything printed in all of the American colonies was concerning Whitefield. He was getting audiences in the tens of thousands from every colony and every socio-economic status—rich, poor, men, women, educated, uneducated, young and old. They all came. He and the gospel message were unifying for all of the colonies. It was unprecedented in American history. 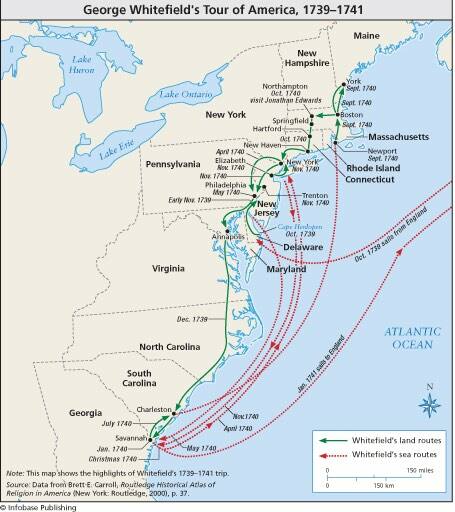 Whitefield eventually made seven trips to the colonies. The spiritual revival continued for about 10 or so years. In addition to the tremendous spiritual revolution, the Great Awakening was an important factor in the American Revolution.

Whitfield and other evangelists publicly called out pastors, calling them “wolves,” “pharisees,” and “spiritually dead.” This led to an individualism, a self-determination, a “spiritual democracy” as one writer put it. Each person is responsible for his own spirituality—not the church or the state. The social order and power structures were shattered, placing emphasis on the individual. It was a revolutionary concept that carried over to political revolution. Defying the religious establishment carried over to defying the king.

“It was during the revivals that the colonists began to view themselves as capable of interpreting the will of God for themselves,” said writer Daniel Gullotta. “It was the First Great Awakening that truly provided the ground for the American colonists to begin to see themselves as a chosen people. They believed that God was working within the American colonies in a special way. Not only this, but the Awakening provided the means by which colonists could communicate this revolutionary ideology. The First Great Awakening was not the American Revolution, but it was an American revolution.”