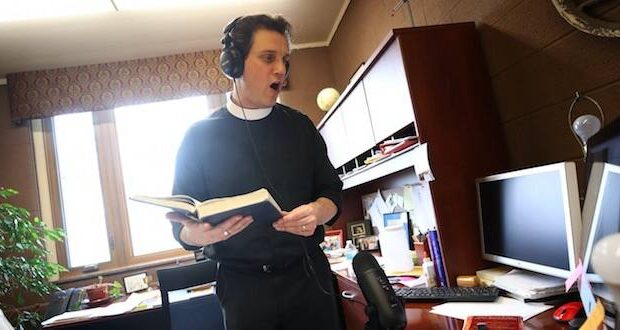 How the sound of religion has changed in the pandemic

Things sound different in a lockdown. The silence of usually bustling streets, the two-tone whirr of ambulance sirens and the sudden awareness of birdsong, all formed an aural backdrop to the coronavirus pandemic.

Nowhere has the change in sound been more noticeable than at houses of worship. The voices of congregants praying, chanting and singing has been quieted in churches, mosques and temples. Instead, congregants have had to work in new acoustic settings, both in person and online.

In short, religion, too, sounds different during the pandemic. We know this, because we have been documenting the sounds of religious life in America. Over the last six years, our teams of faculty and student researchers at Michigan State University and The Ohio State University have cataloged hundreds of audio recordings, tuning in to what religion sounds like across a wide variety of spaces and traditions.

It might seem unusual to think about religion through sounds. Scholars are more inclined to define religions in terms of beliefs and doctrine, or focus on visual iconography and sacred architecture.

But there are good reasons why it is useful to turn to sound to understand religious diversity in the United States.

Listening for religion directs our attention to the things that religious people and communities do, not just what they believe. It brings us into formal spaces and times of religious life, as well as into more mundane moments of everyday practice, such as people chatting while preparing food for a religious festival or the sounds of removing shoes before entering a worship space.

Paying attention to religious sounds can serve as a reminder that religious practice is subjective, often spontaneous and shaped by participants – it takes place in particular moments and spaces.

The religious sounds and silences being made during this pandemic provide extraordinary examples of the power of listening to understand the diversity of religious practices in the United States today.

READ: Lessons learned during lockdown can be valuable for churches moving forward

Prior to the lockdown, we visited sites that might seem obviously religious, like churches, synagogues and mosques. But we also went to places that might seem ostensibly secular – a race track, rodeo, political rally or college football game. We adopted a broad approach to thinking about what counts as a religious sound or space.

By gathering these recordings together and curating them on a custom-built digital platform, we hoped to inspire new ways of thinking about religion in the United States.

When the coronavirus hit, we realized that we, too, would have to change the ways that we conducted our research. In March 2020, we announced a public call for sounds and invited anyone with a smartphone or other recording device to submit audio recordings documenting how their practices were shifting.

We were overwhelmed by the public response. Since March, we have received over 120 audio files from across the U.S. And key patterns are starting to emerge from our collection.

We have noted a strong desire to maintain continuity of religious practices with the help of technology. For example, after the Baha’i House of Worship in Wilmette, Illinois, closed, its regular public worship transitioned to virtual prayer sessions via Zoom for hundreds of attendees from around the world.

Performing rituals online also opened up opportunities for religious tourism and hearing religious sounds in new places. Some of our submissions are live-streamed services recorded by practitioners who always wanted to visit a particular worship space in their own tradition, such as an Episcopalian attending Easter services at the National Cathedral in Washington, D.C. Others are recorded by people who wished to visit a new religious community, as in the case of non-Muslim contributors who “visited” online mosques during the month of Ramadan.

Along with this continuity of religious practice, there is acknowledgment that the circumstances of the pandemic require transforming rituals to align with the moment. We heard the sounds of a hospital chaplain in Quincy, Illinois, who replaced the Christian Maundy Thursday feet washing ritual with a ritual washing of hands in a health care context.

Another key theme emerging is the sounds of religious practices alongside sounds specific to the pandemic. For example, a New York Buddhist practitioner recorded herself chanting with an online community and captured the background sounds of neighbors clapping during the nightly 7 p.m. celebration for first responders. An Easter Sunday service in a parking lot in Walnut Grove, Missouri, recorded parishioners honking their horns to shout “Amen!”

Shelter-in-place orders opened up domestic spaces as primary locations for religious practice. We have heard from practitioners performing religious rituals at home. These spaces have created new worship sounds. Many of our recordings include pets vocalizing, phones beeping, babies crying and private conversations amplified that would generally not be heard in a formal worship setting. This ambient noise is part of the sound of religion during the pandemic.

Sometimes these new contexts produce innovative blending of religious and secular practices. A viral Tweet submitted to our archive of an Orthodox Jewish father chanting the children’s book “Goodnight Moon” to the tune of traditional Torah reading brought together the sounds of formal ritual practice with the increased demands of child care during this crisis.

The domestic worship spaces have also provided opportunities for new religious agency and authority. Lay practitioners are deciding how they will participate in services and, in some cases, performing rituals that ordinarily are reserved for clergy, as in a recording of Christian parents administering Communion to their children.

As religious communities navigate worship services via Zoom, the etiquette and practice around “muting” raises important questions about who should be heard and who has the authority to speak. It also presents challenges for communal singing and chanting.

In our archive we have multiple recordings of a Wiccan Coven in Westerville, Ohio participating in a Cone of Power ritual, a practice to raise energy for magical purposes. In the pre-pandemic version, participants stood together in a circle with linked hands and wove their voices together like a beautiful tapestry.

In the recording produced during the pandemic, the group attempted to re-create this ritual via Zoom, but the overlapping sounds became too cacophonous. All the participants except the priests ended up muting their microphones, which produced a strikingly different sonic experience.

Our collection also includes voices that might not otherwise be heard – or welcomed – in formal religious settings. One of the submitted sound recordings is of a family participating in a Protestant worship service via Zoom. The audio includes the loud vocalizations of their autistic son. In this case, at least, online offerings made religious rituals more accessible and more inclusive.

The recordings in our crowdsourced archive are helping us document in real time the numerous ways that COVID-19 is transforming American religious life. The sounds that we are hearing make audible how, even during a time of physical and social distancing, individuals are striving to worship together.

The pandemic is inspiring new, innovative ways of imagining what it means to be a community and who is included as part of that community.

As houses of worship begin to reopen, we are interested in tracking which of these changes may endure and which may prove more fleeting.

You can contribute recordings to the American Religious Sounds Project religioussounds.osu.edu

This article is republished from The Conversation under a Creative Commons license.

Previous: Speculation grows as to the next Arab nation to sign Israel peace deal
Next: Schools looking for space could turn to churches – doing so has a rich history