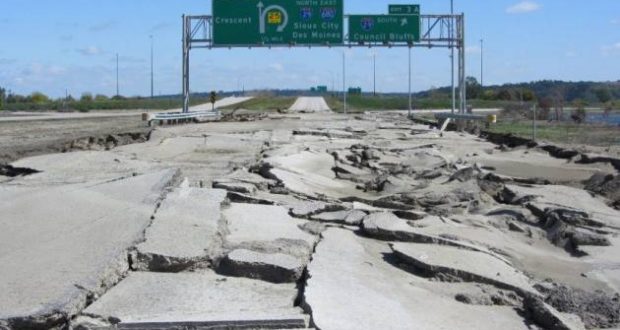 I-29 sustained major damage in spring flooding. The waters have only recently receded from the Missouri portion.

I-29 re-opens after flooding forced closure

Motorists will welcome the news that Interstate 29 has reopened north of St. Joseph even with floodwaters lapping at its shoulders in southwest Iowa.

Adam Watson, an engineer with the Northwest District of the Missouri Department of Transportation, says MoDOT was waiting for word from Iowa before allowing through traffic to take I-29 again.

“It’s not going to be a perfect interstate, but it is open,” Watson tells listeners to the KFEQ Hotline. “There will be areas where there will be head-to-head traffic or you might even have to be under highway construction or rehabilitation where they’re doing the repairs still, but they were able to open it and as soon as they gave us word we were able to open up our section.”

Watson says both states will work to keep the interstate open to avoid a repeat of May 29th, when I-29 reopened only to be shut down almost immediately afterward when flooding caused its closure in southwest Iowa.

“Shortly after we reopened it,” Watson says. “So, we were like, ‘Wow, this is not as much fun as we would like.’ So, we got the closures, the barricades back in place and reclosed it,” “It was not our best day, but let’s be honest, we had fluid conditions and we were responding as we could.”

Watson warns motorists I-29 isn’t ups to interstate standards in Iowa, where it narrows to two-lanes in portions of the state where floodwaters remain high and right next to the pavement.

Watson says the reopening of the interstate removes a bottleneck in northwest Missouri traffic.

“We are excited about that,” Watson says. “We know that a lot of people were struggling with their transportation choices being a little bit limited here due to the natural disasters, but I’m glad we’re starting to get these arteries back open, slowly but surely. If we can get them all open here shortly, I’m not sure that’s going to be able to happen, but I hope we can make great strides in the next few days, weeks, as long as it takes.”

Previous: Drunk driver kills motorist plus the pastor and friend who stopped to help
Next: Supreme Court rules cross on public land OK