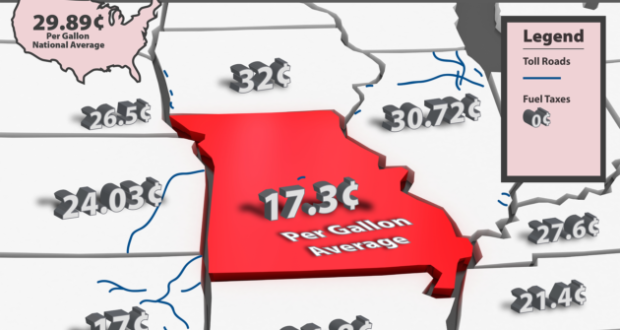 Incremental increase in gas tax will begin in October

The Missouri tax on gas will increase by 2.5 cents annually beginning in October, eventually reaching 29.5 cents per gallon by 2025. Gov. Mike Parson signed the bill into law this week. It is the first increase in over a quarter century when the state had 1 million fewer residents and 15 percent fewer vehicles on the road.

Once fully phased in, the tax increase is expected to generate about $375 million additionally per year for state highways and an additional $138 million per year for city and county transportation needs, according to estimates.

“Properly maintaining transportation infrastructure is a core function of government,” Senate President Pro Tem Dave Schatz said. “Safe roads and bridges keep our economy moving and enable every aspect of our daily lives. In the heart of America, Missouri is at a crossroads: Our transportation system can either be a world-class economic engine or it can be a dangerous anchor that stifles growth. We’ve already seen in neighboring states what happens when government neglects its transportation responsibilities: bridge failures, highway closures and economic devastation.”

The increase also includes a rebate program, modeled after South Carolina’s program. Drivers will be able to apply through the Department of Revenue once a year to receive a refund for the tax.

Jeremy Cady, state director for Americans For Prosperity-Missouri, filed a referendum petition with the secretary of state’s office in an attempt to put the gas tax to a vote of the people. The petition suggested placing the proposal on the November 2022 ballot, more than a year after the first increase would take place.

Aside from the gas tax, the law also includes an increase in fees for alternative fuel decals, the establishment of the Electric Vehicle Task Force under the Department of Revenue and an increase of 10 years in the maximum age of motor vehicles required to have recorded odometer readings in certain instances.  It also enacts a lifetime ban on commercial motor vehicle licenses for people convicted of a felony for using those vehicles in “an act or practice of severe forms of trafficking in persons.”