Home / News / Culture Watch / Is Hollywood cheering the death of the movie theater? 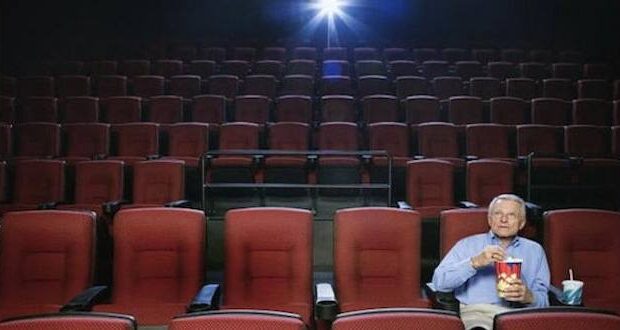 Is Hollywood cheering the death of the movie theater?

You know how the symbiotic relationship between movie studios and U.S. theater chains work, right? To boil it down to its simplest terms, studios spend big tubs of cash to cast and create movies. Then they pay for junkets, screenings, actor promo tours, ads, distribution copies of the film and every other little facet of the vast worldwide promotion and distribution process that leads up to a film’s release. After that, the theaters receive and show the film and give about 60% of the ticket price back to the studio.

That may sound like everybody’s getting rich when you hear about a film raking in hundreds of millions of dollars. But experts say that in fact, after the many, many expenses on both sides, each industry operates on something like a 3 to 4 percent profit. And that’s when things are rolling merrily along like the well-oiled machine it’s all supposed to be.

Thanks to current social distancing restrictions, that machine is broken and leaking precious popcorn oil all over the place.

Theater chains have tried to get things going again by assuring social distancing, cutting their theater capacity down to 40 or 50% and whittling their profit margins down to the quick. But even that hasn’t really been working. And a big part of their floundering woe is due to the fact that Hollywood is being skittish with its film releases. The much buzzed-about (but, in my opinion, rather bleh) film Tenet was sort of a test balloon to see if crowds of moviegoers would stream back in to see a big-ticket pic at the theater. But after clearing barely $20 million on Labor Day weekend, the Tenet test was declared a flop. (It’s done better overseas, where it’s earned $289 million—a tidy haul even before COVID. But in North America, Tenet has only earned $52.5 million in eight weeks.)

After that, every other big-ticket film originally slotted for 2020 (Black Widow and the latest installments of the Wonder Woman, Batman and James Bond franchises, for example) has been either pushed back deep into the holidays or out to somewhere in 2021.

As a result, Regal Cinemas—the second-largest theater chain in the US with 536 theaters and 7,076 screens—officially shuttered its doors indefinitely last month. That leaves AMC and Cinemark, numbers 1 and 3, to pick over very small slices of income from a pretty tiny pie. In fact, on Sept. 30, the National Association of Theatre Owners warned Congress that “69 percent of small and mid-sized theater companies will be forced to file for bankruptcy” if things continue as they are. A lot of those being small chains and mom and pop businesses.

But that raises the question: What if the big studios sorta like the idea of this old system dying away? What if they’re in favor of a major paradigm shift in their industry? I mean, the coronavirus isn’t the only culprit. Theater attendance has been on a steady decrease since 2002. And hey, major entertainment industry shifts have happened before. Remember the days when you used to hear all your favorite tunes played on the local radio station and then run over to the music store to buy an artist’s new album? That business arrangement has certainly been redefined.

While most studios have said that they still support the time-honored theatrical release model, they could be gearing up for a shift to something close to a fully streamed model. They’ve had some success with their efforts so far. Universal Pictures’ Trolls World Tour, for example, went directly to video on demand and made some $100 million in its first three weeks, eclipsing the take for the original Trolls pic’s entire domestic haul. And the studio didn’t have to share a big chunk of their income with theater owners, to boot. Films such as Scoob!, Capone, and Mulan have followed suit. The overall income of these films is harder to pin down because of VOD reporting inconsistences, but Scoob! was said to have jumped to the top of the VOD charts faster than Trolls World Tour.

But is that kind of shift to our movie-watching habits really possible? Well, just recently the Walt Disney Company announced that “in light of the tremendous success achieved to date in the Company’s direct-to-consumer business” it was undertaking a major reorganization of its film and television teams with the goal of bolstering production for its streaming services. And then Disney quickly announced that the much-anticipated Pixar family pic Soul would be skipping theaters and heading direct to streaming, too. Which was a major blow to hopeful theater chain operators.

Then there are the big streaming services such as Netflix (with its estimated 190 million subscribers) and Amazon Prime (with some 150 million) to consider. They’re more than happy to toss their hats in this ring and challenge the status quo as well. In fact, they’d love it if movie-watchers thought of them first when seeking some theatrical entertainment. The Financial Times reported that the major streaming services are shaking up things to an even greater degree in these COVID-cursed times.

Mid-budget movies, such as romantic comedies, could not be shown theatrically at all and instead be picked up by streamers to pad their libraries. Some studios have received offers from streamers of more than three times the prices that had been dangled before the pandemic for their films.

Now, all that doesn’t necessarily foretell the death of the movie theater, but it certainly seems to harken to big changes. And that, of course, will mean some potentially big changes for family audiences who love movies, too—and love going to movies. We’ll just have to wait and see how this plot plays out.

Previous: Arrests are an occupational hazard for pastors in India
Next: Ministries overcome COVID to serve adoption, foster kids and women