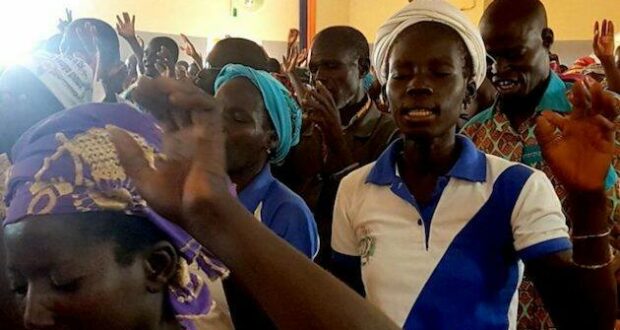 Christians gather in a Burkina Faso church for worship.

Muslim terrorists are suspected in the murder of 15 Christians during a baptism ceremony in the African nation of Burkina Faso. Violent acts linked to al-Qaeda and the Islamic State have multiplied across Central Africa this year.

In a report by International Christian Concern (ICC), Colonel Salfo Kabor, governor of Burkina’s Sahel region, confirmed that the attack took place in the Adjarara area on Tuesday.  Unconfirmed reports say the individual who had been baptized was one of the dead.

“People are shocked and many are running,” said Moha A.G. Agraz, who is from the province.

Islamists have killed thousands of Christian civilians – including religious leaders – often attacking churches during worship times and schools.  In just one recent week, more than 50 people were killed in multiple attacks with the carnage spreading into May with multiple attacks.

Burkina Faso is one of several vulnerable African nations frequently targeted for terrorism and Christian persecution. Others include Nigeria, Liberia, Mali, Sudan and dozens of others.

“Churches across the north of Burkina Faso are being left deserted as Christians flee escalating violence from armed Jihadist groups,” Premier Christian News reported. “More than one million people are now displaced in the West African nation in what the UN Refugee Agency has said is now ‘the world’s fastest-growing humanitarian and protection crisis.’ Although the violence does not affect Christians exclusively, there is no doubt that they are specifically targeted.”

Before Islamist terrorists invaded, Burkina Faso was described as a harmonious nation of religious tolerance and its 2012 constitution guarantees freedom of religion. But according to Persecution International Concern it has been “infiltrated by jihadist and militia groups known to commit grave acts of violence and human rights violations. Extremists have conducted numerous attacks on both civilian and government targets, many times focusing on Christians, their leaders, and places of worship.”

Human rights and religious freedom groups continue to be alarmed by the escalating violence inflicted by Islamic State in West Africa Province (ISWAP), Boko Haram, and al-Qaeda. Since 2020, many are using the term “genocide” to describe what is happening. It is estimated that several million Christians have fled their homes with the true number of dead difficult to determine.

The march of death across the continent shows that Islamist terror groups are spreading at an alarming rate. Several African nations have resorted to inviting in foreign fighters to train and defend local military and law enforcement units. But in other cases, governments have turned a blind eye towards the attacks on Christian minorities, and in at least one instance, have encouraged them with police joining in the slaughter.

According to an August 2020 Pulitzer Center report, a U.S. counterterrorism effort is ongoing in northwest Africa, but only in the form of an annual training exercise, conducted by Special Operations Command Africa, focused on enhancing the capability of nations in West Africa to plan and conduct counterterrorism missions. This involves eleven nations: Algeria, Burkina Faso, Cameroon, Chad, Mali, Mauritania, Morocco, Niger, Nigeria, Senegal, and Tunisia.

According to the rights group Intersociety Rule of Law, 1,470 Nigerian Christians were murdered and over 2,200 were abducted by jihadists in the last several months.

Persecution International Concern asks that you “pray for our brothers and sisters in Burkina Faso and ask the Lord to protect Christians living in these persecuted areas.”