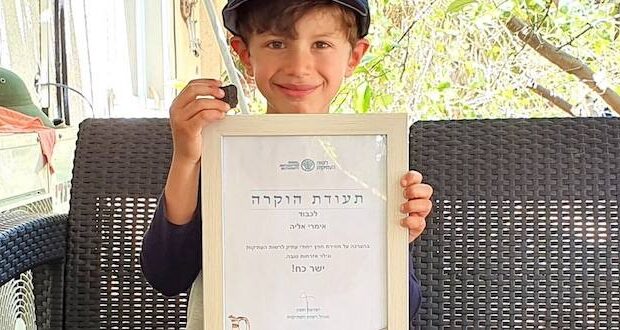 A six-year-old Israeli boy hiking with his family has discovered a one-of-a-kind tablet with a 3,500-year-old depiction of a naked, humiliated Canaanite prisoner and his captor.

The amazing image, impressed upon a clay seal by an artisan whose fingerprints are still visible on the square tablet’s back — was found by little Imri Elya while walking on Tel Jemmah near the Gaza border, according to an Israel Antiquities Authority press release. Elya received a certificate of good citizenship for turning the artifact over to the IAA. 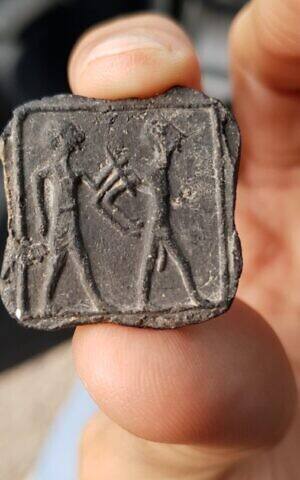 The 2.80 x 2.80 centimeter (1.1 inch square) clay impression was likely a souvenir of victory, similar to an honor badge or medal, IAA archaeologist Saar Ganor told The Times of Israel. Since the impression was created from a mold, he said it’s possible there were many created and distributed. They may have been used as decorations, perhaps pressed inside other items — such as belts or furniture — that showcased the owners’ total victories.

Ganor believes the scene is of two Canaanites. The naked, rail-thin prisoner’s hands are so violently tied behind him that his back is ramrod straight. He is held captive by a clothed, somewhat plumper warden, with trimmed curly hair and a beard. They are both Canaanites, said Ganor, but the umbrella term refers to an eclectic mix of local peoples of different tribes, “all fighting over the things we fight for today — water, land.”

“The artist who created this tablet appeared to have been influenced by similar representations known in Ancient Near East art. The manner in which the captive is bound has been seen previously in reliefs and artifacts found in Egypt and northern Sinai,” said Ganor and IAA researchers Itamar Weissbein and Oren Shmueli in the press release.

Through comparing and contrasting their find with others from the ancient world, the IAA researchers date the artifact to the late Bronze Age (between the 12th and 15th centuries BCE). Ganor said the late Bronze Age is one of the most represented layers during excavations at the site.

During this time, the area of Tel Jemmah (also called Tel Gama) saw fierce battles — between Egypt and city/state kings it came to rule, as well as between the local kings themselves. Likewise, nomads called Habiru also raided the area, located on the banks of the Besor Stream, one of the major water sources in the Negev, and near an ancient road used to reach the Gaza port some 10 kilometers away.

Tel Jemmeh is identified by some archaeologists as the Canaanite city of Yurza (also called Yarza).

Yurza is one of the Canaanite sites mentioned in three letters within a trove of 350 Akkadian missives between the Egyptian pharaoh and the Canaanite kings discovered in the Egyptian city of El-Amarna, once the ancient Egyptian capital of Akhetaten, which was founded circa 1350–1330 BCE. It is also recorded in the annals of Thutmose III as the southernmost edge of Canaan and used in the phrase “From Yurza to the ends of the land.”

Since the minuscule tablet was not found at a scientific, stratified excavation its dating is difficult to secure. The archaeologists compared it to other similar artifacts, the closest being a very similar Late Bronze clay impression discovered in Northern Sinai 100 years ago in an excavation led by pioneering British archaeologist Flinders Petrie, said Ganor.

According to Ganor, the scene portrayed on the clay impression has elements of several artifacts from the late Bronze era, including an ivory inscription found at Tel Megiddo, as well as depictions of prisoners from the Battle of Kadesh that are found in the relief at the Abu Simbel Temple in Egypt under Ramses II.

Although tiny in size, the IAA researchers believe the scene impressed on the tablet depicts a ruler’s dominance over his enemy and is based on descriptions of victory parades in the region.

“This opens a visual window to understanding the struggle for dominance in the south of the country during the Canaanite period,” said the researchers.

–Times of Israel and wire services

Previous: Overwhelmed by streaming services?
Next: In interview with Pastor Greg Laurie, Mike Pompeo says he turns to scripture for guidance