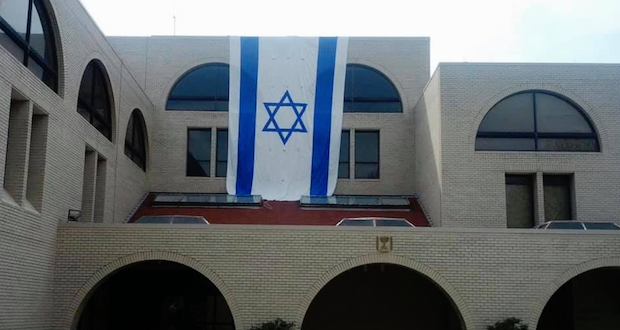 Israel's embassy in the United States.

Israeli embassies worldwide shut down in strike against own government

Israeli embassies and consulates around the world shut down Wednesday until further notice due to an ongoing dispute with Israel’s Finance Ministry over funding for Israeli diplomats abroad.

Israeli diplomats and other foreign service workers declared a strike Wednesday and accused the Finance Ministry of breaching a prior agreement about funding.

The Times of Israel reports that the embassies are on strike because Israel’s treasury reportedly backtracked on previous understandings and said it would force diplomats to pay back thousands of dollars they had been reimbursed for expenses.

“Due to the decision of the Israeli Ministry of Finance to breach understandings that were agreed upon and signed on July 21, 2019, and to apply a one-sided procedure that alters a protocol that has been in place for several decades, we are forced to close the embassy. No consular services will be provided and no one will be allowed to enter the Embassy/Consulate.

“Israeli diplomats are committed at all times to strive to enhance Israel’s strength and resilience. Unfortunately, the decision of the Ministry of Finance does not leave us any choice but to take the above-mentioned action, since the vital interests of the State of Israel have been harmed. We hope that this crisis will be resolved as soon as possible.”

Israeli diplomats abroad have long complained about low salaries and poor working conditions. Israel runs on one of the tightest budgets in the world, having to divert a significant portion to defense spending and anti-terrorism efforts.

The strikes present a major challenge to Israelis traveling abroad who turn to their embassies or consulates in case their passports get lost or stolen or if they suffer a medical emergency.

Arutz Sheva reports the shut down will also force the closure of crossings from Judea, Samaria, and the Gaza Strip.

Previous: Hillsong pastor shares his thoughts on why parents should allow trick or treating
Next: Wife of American pastor arrested in India says his only crime is living for Jesus