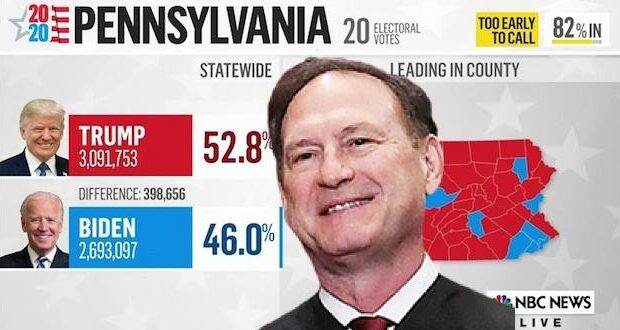 In a decision that has huge implications for the Pennsylvania presidential election, Supreme Court Justice Samuel Alito has moved up a key deadline used by the high court.

The conservative justice asked officials in Pennsylvania to file briefs by Tuesday at 9 a.m. in response to a lawsuit filed by Rep. Mike Kelly (R-Pa.) in a bid to overturn what many consider the state’s questionable election results.

Tuesday, notably, is the “safe harbor” deadline that requires controversies surrounding elections to be ended so states can choose their electors before the Dec. 14 meeting of the Electoral College. Alito initially called for response arguments by 4 p.m. Wednesday, Dec. 9, before it was changed.

The Tuesday, Dec. 8 deadline could be a signal that the Supreme Court takes up Kelly’s case, which was shot down by the Pennsylvania Supreme Court last weekend. Kelly has argued that the 2019 Pennsylvania law, Act 77, violates Pennsylvania’s state Constitution and the U.S. Constitution with its “no-excuse mail-in” voting provision. Kelly’s lawsuit was joined by GOP congressional candidate Sean Parnell and others.

Their lawsuit argued that the only way to increase mail-in voting was via a constitutional amendment, saying the Pennsylvania Legislature’s passage of the bill was illegal. They are seeking to have hundreds of thousands of ballots disqualified as a result, which would be more than enough to flip the result of the election in the state.

“Pennsylvania’s General Assembly exceeded its powers by unconstitutionally allowing no-excuse absentee voting, including for federal offices, in the Election,” Kelly’s attorney wrote to Justice Alito, according to Law & Crime. “The opinion below forecloses any means of remedying Petitioners’ injuries.”

“With respect to elections for federal office, both state legislatures and the Congress have specified roles inscribed in the Constitution as fail-safes for state failures in conducting elections,” their petition also said.

The Pennsylvania Supreme Court rejected their lawsuit and claimed Kelly and Parnell should have raised it earlier. However, some, including Sen. Ted Cruz (R-Texas), accused the state court of engaging in “gamesmanship,” while adding that their lawsuit “argues that Pennsylvania cannot change the rules in the middle of the game. If Pennsylvania wants to change how voting occurs, the state must follow the law to do so.”

Lawyers for Pennsylvania Secretary of State Kathy Boockvar and Gov. Tom Wolf, both Democrats, have argued that Kelly’s petition is too late.

“It is simply too late to invoke the U.S. Constitution now; they have waived their arguments. For this reason, and because the fatal flaws in Petitioners’ original case mean that the Supreme Court of the United States is highly unlikely to grant relief, this Court should deny Petitioners’ Application,” their lawyers said.