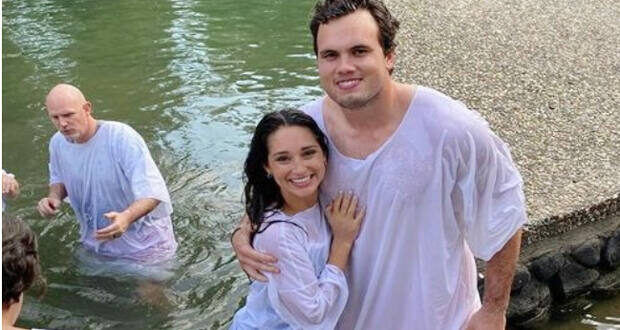 Following a season in which he posted career highs in catches (55) and receiving yards (652), Los Angeles Chargers tight end Hunter Henry recently embarked on a trip to Israel. He then posted photos of him and his wife, Parker, getting baptized in the Jordan River.

“Buried with Christ in Baptism, Raised to walk in Newness of life (Romans 6:4),” the caption read. “Being able to baptize my wife then get baptized by her was an unreal moment. God is working and can’t wait to continue to experience him on a new level the rest of this trip.”

READ: Saints QB Drew Brees to return in 2020 as he seeks to love God and others

Henry has long been an outspoken believer, and as the 25-year-old has established himself in the NFL, he’s also established a public platform. He knows he can use that for good and make an impact.

“We’re like sponges. I feel like what we fill ourselves up with, eventually you’ll be squeezed, and what you fill yourself up with is going to come out. So I think showing that to everybody and just putting that in the centerfold of your life and putting that on your platform, this is an awesome opportunity.”

Henry started all 12 games he played in 2019 while posting the career-high numbers. He has battled injuries since a standout rookie season in 2016 when he started 10 of 15 games, led all rookie tight ends with 478 receiving yards, and tied for a league-leading eight touchdowns among tight ends. Then Henry missed the last two games of 2017 due to a kidney injury, was sidelined for all of 2018 after suffering a knee injury in an offseason practice, and missed four games this past season with a tibial plateau fracture in his knee.

During the NFL’s “My Cause My Cleats” week this past season, Henry also expressed his heart to end slavery. He sported custom cleats highlighting International Justice Mission, and started an online “pledge it” campaign, shared it on social media, and called on people to donate and support the organization. His teammates took notice.

“They’re like, ‘Slavery? I thought that ended way back when Abe Lincoln ended it, right?’” Henry said. “But I’m like, ‘There’s more to it, man. There are people all over the world that are trapped and can’t get out of things, when you really look into it.’ So I’d just talk to guys in the locker room about it, it was pretty cool.”