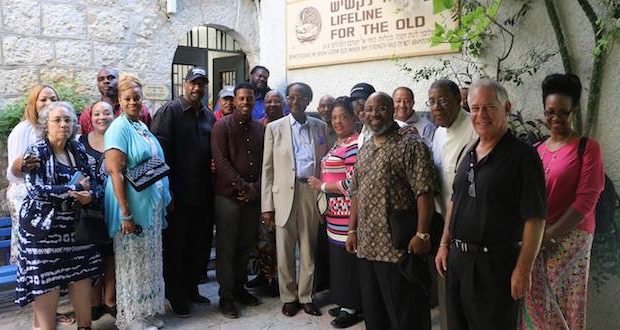 African-American evangelical leaders visited a Jerusalem crafts workshop for elderly Israelis, a project supported by the International Fellowship of Christians and Jews. The group and Israel's tourism ministry sponsored the pastors' trip to Israel, part of the Fellowship's new outreach effort to African-American congregations. Courtesy of IFCJ

Lifeway polls African Americans on Israel, religion and the media

American Jews and African Americans often worked side by side during the civil rights movement. They were joined by Republicans who supported civil rights legislation while many Democrats in Congress opposed it.

In more recent years, however, the relationship has become more complicated due to conflicts between the nation of Israel and Palestinians and the resulting political responses from groups like Black Lives Matter.

A new study from LifeWay Research explored African Americans’ thoughts about Israel, Jews, religious identification, news consumption and other issues. On many of the issues related directly to Israel, African Americans frequently say they’re unsure what to think.

READ: Prejudice against Blacks and Hispanics drops under Trump presidency

“Needed social reforms in the U.S. may have distracted African Americans’ attention from following challenges in Israel,” said Scott McConnell, executive director of LifeWay Research. “That hasn’t turned many African Americans against Israel but leaves many with honestly no opinion on matters of support, conflicts and even history.”

The study, sponsored by the Philos Project, found African Americans are more likely to say they carefully follow domestic policy (68 percent) than say the same about foreign policy (59 percent).

With Israel specifically, 42 percent of African Americans have a positive perception of the country. More than a quarter (27 percent) have a negative opinion. A third (32 percent) aren’t sure.

Three in 5 (61 percent) say a political candidate having pro-Israel policies would make them neither more nor less likely to vote for that candidate. 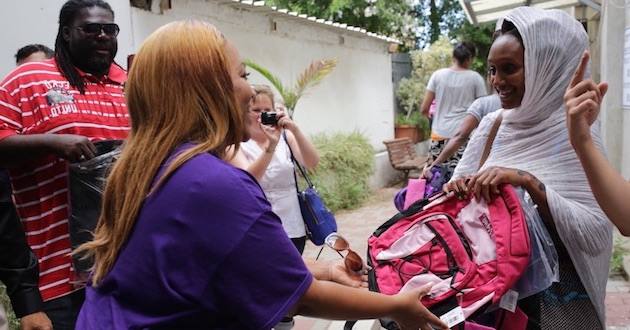 African Americans are divided on the amount of help the U.S. offers to Israel. While 3 in 10 say the U.S. is doing the right amount, 23 percent say it’s too much, 12 percent say it’s not enough, and 35 percent aren’t sure.

Half (52 percent) say they support Israel’s statehood, while 18 percent disagree. Three in 10 say they’re not sure.

Two in 5 African Americans (39 percent) say the international community denies basic recognition as a nation to Israel. A quarter disagree and 36 percent aren’t sure.

Among those who support Israel’s statehood, 71 percent say a reason they do so is because every nation has a right to exist, and 30 percent say it’s because Israel is the historic Jewish homeland.

Another 24 percent say their support is influenced by Israel being the United States’ closest ally in an unstable region.

Still, other African Americans speak of Israel being a needed refuge for Jews after the Holocaust (15 percent) or the safest place for religious minorities in the Middle East (11 percent).

Many African Americans see historic connections between themselves and Jews during the civil rights movement. A significant number of African Americans also draw comparisons to their overcoming struggles as a people and that of the ancient Israelites.

More than 2 in 5 (43 percent) say Jewish people in America were instrumental in the civil rights movement, while a quarter (23 percent) disagree.

Around a quarter say their opinion of Israel has been positively influenced due to the historic parallels between the enslavement of Jews in ancient Egypt and blacks in America (27 percent) and due to the similarities between the two groups overcoming oppression: Jewish people in pursuing the promised land and African Americans pursing civil rights (26 percent).

More than a quarter of African Americans (28percent) say they are seeing more black people they know express anti-Semitism than in the past.

Three in 10 African Americans (30 percent) agree with the subtle anti-Semitic phrase, “Jewish people have too much control of American finances.”

Around 1 in 5 (19 percent) believe Jewish people are blocking black progress in the United States.

When asked about a Louis Farrakhan quote claiming Jewish people have a “tremendous” influence in the U.S. government and as a result “black people in this country will never be free until they are free of that kind of control,” 41 percent of African Americans agree.

“While they may be unrelated, it is worth noting that at the same time the contributions of Jewish people in the civil rights movement have passed beyond the memory of the majority of African Americans, some are also seeing a rise in anti-Semitism,” said McConnell.

African Americans say the news media (46 percent) has influenced their opinions about Israel. Several say the Bible (24 percent), friends and family (18 percent) and positions of elected officials (15 percent) have also influenced them. A quarter aren’t sure.

A third of African Americans (33 percent) say they have a Jewish friend.

When asked what has influenced them the most, African Americans are most likely to point to the media (34 percent) or the Bible (17 percent). Still, 26 percent aren’t sure.

Eight in 10 say they regularly get news from television. Around half turn to social media (48 percent) or websites (46 percent). Fewer point to the radio (37 percent), print media (29 percent) or news apps (27 percent) as a regular news source.

Still, African Americans aren’t convinced the news sources they follow are objective in their coverage of Israel. A quarter (26 percent) believe the reporting is objective. One in 10 believe the news is slanted against Israel, while 16 percent believe it is pro-Israel. Almost half (48 percent) aren’t sure.

Specific religious beliefs may also play into many African Americans’ support of Israel.

Two in 5 (41 percent) say the formation of modern Israel is a fulfillment of God’s covenant with the Jewish people.

More than 3 in 5 African Americans (62 percent) believe God’s promise of the land of Israel to Abraham and his descendants was for all time.

“No single source has influenced the majority of African American opinions on Israel,” said McConnell. “Media, faith and friends each influence some, but 1 in 4 aren’t sure of any influence.”

Seven in 10 African Americans say they sympathize equally with the hardships Israelis and Palestinians face.

Fifteen percent say they sympathize more with the Palestinians. The same number feel more connection to the Israelis. Those numbers are similar to a previous LifeWay Research study of the views of Hispanic Christians toward Israel .

Half of African Americans agree the state of Israel is regularly attacked with bombs and terrorist acts by Palestinians.

Close to half (46 percent) agree the Palestinian Authority denies basic recognition as a nation to Israel.

Around 2 in 5 African Americans (41 percent) believe the state of Israel has laws that discriminate against the Palestinian people. The same percentage (41 percent) say they aren’t sure.

Around a third (32 percent) believe Americans should boycott Israel over its treatment of Palestinians. Slightly more (38 percent) aren’t sure.

Most African Americans (70 percent) say they were unaware the platform of the Black Lives Matter movement accuses Israel of genocide and apartheid against the Palestinian people.

Most blacks (54 percent) say the platform doesn’t change their opinion of the Palestinians and Israel.

“African Americans see difficulties faced by both Palestinians and Israelis, and most are not taking one side on various aspects of the conflict,” said McConnell. “Yet 6 in 10 are concerned about the safety of Christians in areas controlled by the Palestinian authority.”

Methodology: The online survey of 1,019 African Americans was conducted March 22-April 2 by LifeWay Research. The study was sponsored by the Philos Project. Sample was obtained from a large national panel. Maximum quotas and slight weights were used for gender, region, age, education and religious group to reflect the African American population. The sample provides 95 percent confidence that the sampling error from the panel does not exceed plus or minus 3.6 percent. Margins of error are higher in sub-groups.