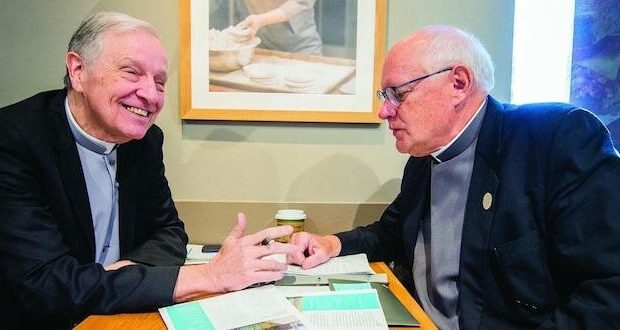 The Archdiocese of Kansas City now has an association of deacons committed to pro-life ministry. Archbishop Joseph F. Naumann signed a decree approving the clerical association Deacons of Hope.

“Our goal is to uphold the dignity of individual life from conception to natural death and whatever that entails in between,” cofounder Doug Hemke said, according to the Catholic news source Crux. “That means building a house with Habitat for Humanity, a Walk with Moms, a vigil against the death penalty — yeah, it’s that.

“Aside from just having a ministerial preference for the unborn, we also serve the poor, the imprisoned, the marginalized, the oppressed, the sick and the aged. Whatever we need to do to uphold the image and likeness of God in humanity is what we do. Everything in between is a part of the pro-life ministry of the Deacons of Hope.”

Kevin Cummings co-founded the organization. Both me perform traditional diaconal duties at their parishes, which include presiding at weddings, funerals and baptisms, as well as preaching and assisting priests at Mass. But they also had hearts for pro-life ministry. About three years ago, they began to raise funds for the Gabriel Project and helped establish the St. Mary’s Home for Mothers in Liberty

They wanted to do even more but wondered how. Cummings said he and Hemke decided that pro-life ministry is what drives them. “We’re in our 60s and don’t have a lot more time to do this, so let’s get to it,” he said.

Although the Deacons of Hope will be ecumenical in its support of pro-life activities and ministries, membership in the association is limited to Catholic permanent deacons. So far, in addition to the two co-founders, the Deacons of Hope has four other members. Deacon Cummings is the first general moderator of the association until their first general assembly, which must be convened within two years.

Now that the association has gotten the church recognition it needs, it will work toward getting the legal and practical steps finished on the corporate level, such as forming a board of directors, getting a tax identification number, becoming a nonprofit tax-exempt organization and filing its bylaws with the Missouri Secretary of State.

“Now we’re in the active recruiting stage, developing awareness and reaching out to our brother deacons,” Hemke said: “Potentially, it’s an international organization.”