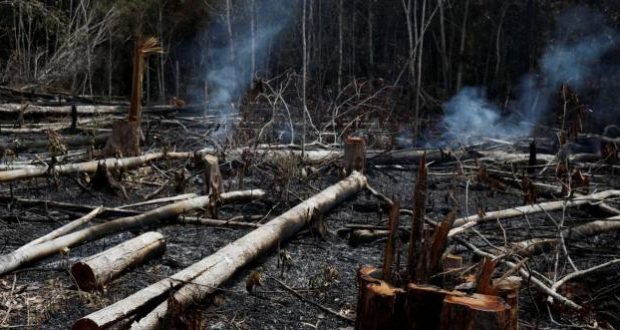 As wildfires spread across a small corner of the Amazon, the media may be misrepresenting their impact and size compared to other large fires.

The government of Brazil, while struggling to contain them, has rejected offers of assistance saying they have the resources even while news reports say the world’s oxygen supply is at risk.

But are the fires really the largest in the world as many in the media report?

The current Amazon fire is 2,240,000 acres – that’s 3,500 square miles. Numerous fires around the world, even in the United States, have been larger. You can see them listed in the chart below.

This is not the first time fires of this size have occurred around the world over the past two centuries. In fact, eight fires have been larger with the biggest as recent as 2003. But with a media promoting global warming, the fires have been elevated in the news with climate change blamed as the culprit.

Currently the fires have only scorched 3,500 square miles out of over 2,700,000 square mile that comprises the Amazon. While large, that is dwarfed by a Russian fire 16 years ago.

Brazil’s leaders seemed insulted by the media hype that has led Brazil’s citizens to protest in the streets.

The website Globalfiredata.org shows the fires fairly much in line with other Amazon fires, many of which were much larger over the last 20 years. 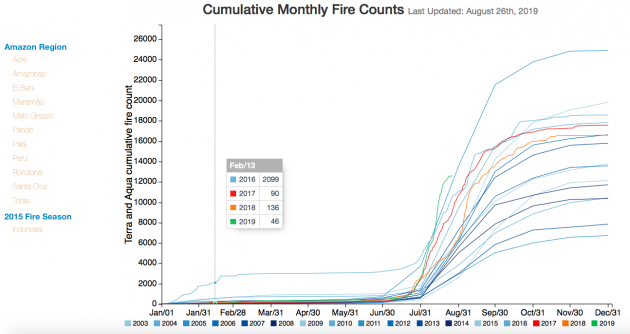 The “hype,” however, has prompted world leaders, including President Donald Trump, to offer help.

Trump was the first to offer help this week and his statements were expanded upon by other world leaders.

The G-7 nations pledged $22 million to help Brazil fight the fires, but critics say the amount pledged is far too little and the Brazilian government is reportedly rejecting the offer.

As satellite monitoring agencies have spotted thousands of individual fires in the Amazon region, Brazil’s military is deploying 44,000 troops to fight the spreading fires.

American technology is at work to put the fires out as C130’s are dropping thousands of gallons of water, and a Boeing 747 supertanker is also attacking the flames, but the fight on the ground is more difficult.

A spokesman for Brazil’s firefighters said, “The big problem this year is the number of small spots of fire because if it was one or a few big fires would be easier to manage the resources, but when you have a lot of spots at the same time it’s more difficult.”

In one case, a small crew of firefighters used shovels and mats against the fires while some even used their feet to put it out. And one man emerged from the jungle using his machete to battle the blaze.

Many of the fires are set by farmers and loggers seeking to clear their land. Ironically, they are now the victims.

A 68-year-old coffee farmer said, “Nobody knows who is or who is not guilty for the fires. We want just to live our life.”

As the media continues to say this is the largest fire in history, the facts prove otherwise.

The 15 Largest Wildfires by Acres Burned

Previous: LIFE LESSONS FROM A LITTLE ONE – Real Prayers
Next: News Briefs: America’s poor better off than Europeans; Economy boost coming?; Risky mortgages are back; ‘Beto’ all in for abortion until birth