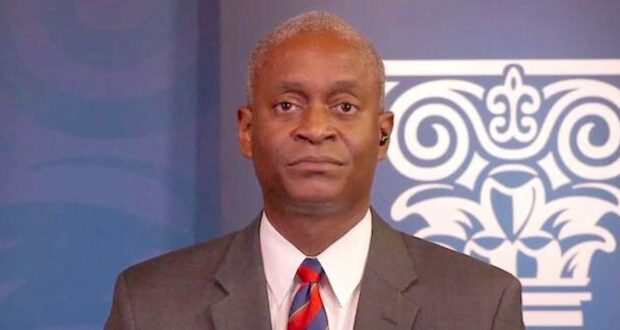 Tudy Rodney of Rodney’s Jamaican Soul Food is one of the Black business owners harmed by Major League Baseball.

The decision by Major League Baseball to move its All-Star Game out of Atlanta because of Georgia’s new voting laws is having a significant finical impact.

Now Black, Asian, Hispanic and white small business owners are joining a lawsuit against the sports monopoly for causing harm to their livelihoods. The coalition will be difficult for MLB to fight because it says it moved the games to “help” minorities.

After officials announced on April 2 that they were shifting the game to Colorado, more than 8,000 hotel reservations were canceled in the Atlanta area, and Cobb County officials estimated the move would cost the local economy some $100 million.

Past MLB All-Star events have brought in between $37 million and $190 million for the communities that host them. MLB officials said it moved the game because of Georgia’s election integrity law, which was described by supporters as a way to bolster election security and by critics as racist and restrictive.

Affected businesses fired back by filing a lawsuit last week.

CAN YOU SPARE A BUCK? Donate $1 now to Metro Voice

“MLB Defendants intended to punish Georgians because their state enacted a reasonable ballot-integrity statute and to coerce Georgia and its duly elected government to surrender Georgia’s sovereignty in our federal system,” it said. “Plaintiff and its members were injured as a direct and proximate result of the aforesaid conduct in an amount to be determined at trial, but not less than $100 million. MLB Defendants’ conduct was willful and contumacious and designed to inflict substantial harm, including reputational harm, upon Plaintiff. Accordingly, the Court should award not less than $1 billion in punitive damages.”

Tudy Rodney of Rodney’s Jamaican Soul Food in Atlanta told FOX 5 Atlanta’s “Good Day Atlanta” on Monday that the move by the MLB was “crushing.” Rodney’s restaurant is near the Braves’ ballpark.

“We’re trying to build back from a pandemic that happened last year, and something like this is not good for business,” said Rodney. “Rodney’s will suffer.”

Job Creators Network, a small-business lobbying group, filed the suit. It is asking MLB and the union to pay money to businesses that won’t see revenue from the game now that it’s been moved.

“MLB robbed the small businesses of Atlanta — many of them minority-owned — of $100 million; we want the game back where it belongs,” Alfredo Ortiz, president and CEO of the network, said in a statement. “This was a knee-jerk, hypocritical and illegal reaction to misinformation about Georgia’s new voting law, which includes voter ID. Major League Baseball itself requests ID at will-call ticket windows at Yankee Stadium in New York, Busch Stadium in St. Louis and at ballparks all across the country.”

“A lot of these were minority-owned businesses that were really looking forward [to] and desperately needed this kind of revenue in stream,” Ortiz says. “And all because, quite frankly, there was a misinterpretation or misunderstanding or, quite frankly, just an outright lie of the law that was passed here in Georgia on voting rights.”