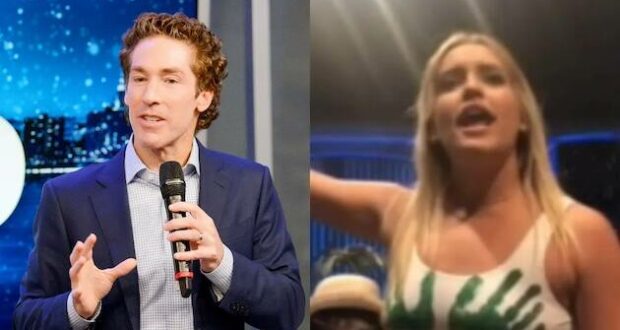 Pro-abortion activists are becoming bolder as the U.S. Supreme Court gets nearer to announcing its decision about the future of Roe v. Wade. On Sunday, they interrupted Pastor Joel Osteen’s church service in Houston by taking off their clothes and shouting according to police reports.

“My body, my choice,” one activist with Rise Up 4 Abortion Rights was heard shouting in the church as she took off her dress, leaving her wearing only underwear, according to a video posted on social media.

“Overturn Roe, hell no,” another activist screamed as she removed her clothing. Three women took part in the protest by stripping down to their underwear on Sunday in the church and shouting. The women were escorted out of the church, allowing Osteen to continue preaching, which garnered cheers and applause from churchgoers.

Outside, however, the activists continued their protest and were joined by other supporters. The activists are part of Rise Up 4 Abortion Rights, which has condemned the possibility of the Supreme Court overturning Roe. v. Wade following a leaked draft decision last month.

“I know it seems very outrageous to do it in a church in a private space,” activist Julianne D’Eredita said. “However, the people that are enforcing these laws have no qualms coming up to women in private spaces such as doctors’ offices and medical clinics to harass them and call them murderers.”

The video of the disruption has since gained thousands of views.

“Joel Osteen has an international audience, and silence is violence when it comes to things like these,” D’Eredita said “We have a very unprecedented and very short amount of time to garner the attention that we need to get millions of people on the streets, millions of people doing actions like we were today.”

The Supreme Court released a series of decisions on Monday morning but did not issue a ruling in the case that could overturn Roe.

There continue to be dozens of incidents each week at churches and pro-life organizations across the country. For the most part, American media has remained silent on the attacks.

BREAKING: A Washington, D.C. crisis pregnancy center was vandalized with red paint splashed across the center’s door. “Jane Says Revenge” was spray-painted on the building. https://t.co/GwCZGXIAZA

According to reports in conservative media outlets, another group responsible for some of these attacks is “Jane’s Revenge.” It is an “extremist group that believes if the abortion is restricted, then pro-life clinics shouldn’t be safe. “It takes a severe detachment from reality to think that babies don’t deserve a right to life and that women who are against abortion should not have access to places that help them through unwanted pregnancies and fit their beliefs,” writes Redstate.com.