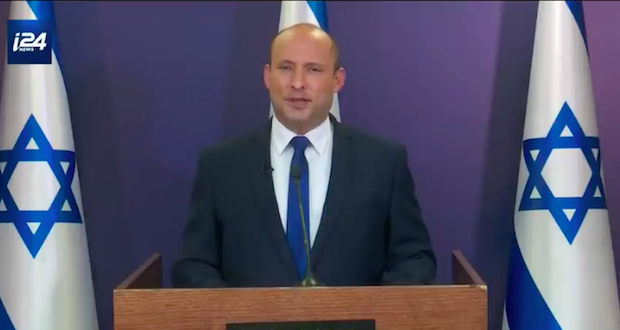 Israel will have a new government after multiple parties formed a new coalition on Wednesday. The union means enough votes in the country’s Knesset to replace Benjamin Netanyahu as Prime Minister.

A deal was reached primarily between tech millionaire and former defense secretary Naftalli Bennett and Yair Lapid just ahead of a midnight deadline. If the agreement had not been reached,  it would have required the fifth election in two years and continued the political stalemate.

Under the new coalition, Bennett and Lapid will split the prime minister role in turns, with Bennett set to serve the first two years.

Lapid will then take over as prime minister and Bennett will serve as the alternate.

In a national address, Bennett spoke of the political malaise in the country and its freedom.

“We have been looking longingly at our country sabotaging itself, weakening itself, losing its ability to function,” he said. “2000 years ago we lost a Jewish state here because of infighting. This will not happen again on my watch.”

Bennet, who is to the right of Netanyahu, will be the first Orthodox Jew to lead a country that has typically chosen more secular leaders. Bennett supports Israeli annexation of large swaths of Judea and Samara – the biblical heartland of the country and which was renamed “West Bank” during Jordan’s occupation of the area between Israel’s independence in 1948 and the Six-Day War in 1967.

At the conclusion of the war, Israel had successsfully beat back and defeated numerous Arab states which had attacked the fledgling democracy. Israel ended up retaking control of the “West Bank,” the Sinai peninsula and also the Golan Heights from Syria’s despotic leader. In a peace treaty with Egypt it gave up the Sinai, and the Palestinian Arabs were given control of much of Judea and Samaria in a treaty with Jordan. Israel has since annexed the Golan Heights with the support of the Trump administration.

In a late-night call to President Reuven Rivlin, Lapid said an agreement had been reached and a coalition formed.

“I commit to you Mr. President, that this government will work to serve all the citizens of Israel including those who aren’t members of it, will respect those who oppose it, and do everything in its power to unite all parts of Israeli society,” Lapid pledged.

The government will be comprised of eight different parties, including the Yesh Atid, Kachol Lavan, Yamina, Labor, Yisrael Beiteinu, New Hope, Meretz and Ra’am. The inclusion of Ra’am is the most radical and controversial because it is part of the Islamic movement.

The agreement is the first-ever coalition deal signed by an Arab party even though Arabs have served in the Knesset for years and serve on he country’s Supreme Court.

Rivlin thanked Lapid during their phone conversation and said, “I congratulate you and the heads of the parties on your agreement to form a government. We expect the Knesset will convene as soon as possible to ratify the government, as required.”

The Israeli parliament will vote to approve the new government as early as next week.

If the coalition is approved, Netanyahu’s historic 12-year rule will come to an end. He has criticized the inclusion of the Ra’am party because of its ties to Islamists, calling it the “fraud of the century” and saying it could give power to a “dangerous left-wing government.”

In a nationally televised address, Bennett said he would “form a national unity government” with Lapid in order to “save the country from a tailspin and return Israel to its course.”

The Knesset will require a 61-seat majority in order to permit the new government coalition.