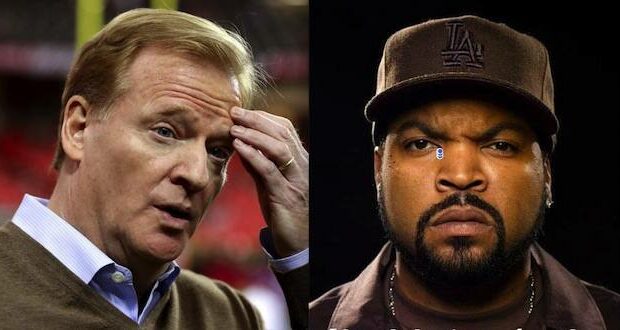 The face of the NFL’s newest social justice initiative is Ice Cube, a racist and anti-Semitic rapper who in his songs has called for violence against Asians and the murder of Jews.

Ice Cube, whose real name is O’Shea Jackson, has in his songs used racist and anti-Semitic language describing a Jewish music producer as a “white Jew” and “cracker” and Asian shopkeepers as “little Chinese motherf***r[s].” He is also an admirer of Louis Farrakhan, the Nation of Islam leader who has called Jews wicked and compared them to “termites.”

Now, Ice Cube will lead the NFL’s “economic equity” program to spur partnerships with black-owned businesses. The partnership is through the rapper’s Contract With Black America Institute, which supports reparations and affirmative action for secondary schools and colleges.

The move comes as the NFL and Roger Goodell face intense criticism over its handling of race issues. Former Miami Dolphins head coach Brian Flores earlier this year sued the league and three of its teams for alleged racial discrimination. Social justice activists have criticized the NFL for failing to hire more black head coaches.

Ice Cube has an extensive history of antisemitic, anti-white, and anti-Asian rhetoric. He came under fire in 2020 for a series of social media posts with antisemitic tropes and for praising Farrakhan.

“The Honorable Louis Farrakhan continues to warn America to this very second and he’s labeled one of your ‘evil names’ and you turn your ears off,” Ice Cube tweeted in June 2020.

The rapper, who has posted photos with Farrakhan, later that month chided CNN anchor Jake Tapper for calling the preacher a “vile, anti-LGBTQ, anti-Semitic misogynist.”

Ice Cube at the time denied allegations of antisemitism, but the scandal renewed scrutiny of songs from earlier in his career that urge violence against Asians and Jewish music executive Jerry Heller.

In the track “No Vaseline” from the 1991 album Death Certificate, Ice Cube called Heller a “white Jew” and “cracker.”

“Get rid of that devil real simple. Put a bullet in his temple,” he rapped.

In “Black Korea,” the rapper threatened to “burn” Asian-owned stores “to a crisp” over perceived racial profiling. He referred to the store owners as “little Chinese motherf***r[s]” and “Oriental one penny countin’ motherf***rs.”

The associate dean of the Simon Wiesenthal Center called for a boycott of the album at the time, saying that Ice Cube’s lyrics “threaten and promote violence” against Asians and “call for the murder” of Heller.

It is the lastest misstep by the NFL which has consistently lost viewers over its move into what many see as politically and racially charged stances.