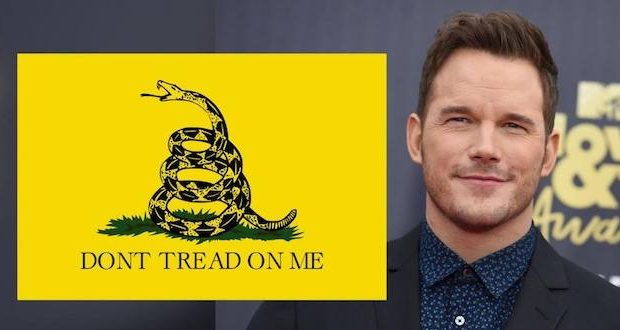 Popular movie actor Chris Pratt has, you guessed it, been called a racist for wearing a t-shirt with a popular pre-Revolutionary War symbol.

The conservative actor was slammed for wearing the historic symbol known as the Gadsden flag on his shirt. The coiled rattlesnake with thirteen rattles on a yellow background was designed by Christopher Gadsden, a Charleston-born brigadier general in the Continental Army. It’s first recorded use was in October of 1775.

Pratt and new wife Katherine Schwarzenegger were spotted on a Los Angeles street earlier this week when a photo was taken.  The picture showed the actor wearing a blue t-shirt with the Gadsden symbol of a rattlesnake over a US flag with the words “Don’t Tread On Me” at the bottom.

Several social media users criticized Pratt for wearing the symbol.  But they only found this out after Yahoo UK  took a giant leap, calling Pratt’s choice of wardrobe a “white supremacist” shirt in their story.

So in this case, you do have to consider the source – a British news website calling Pratt’s t-shirt a “white supremacist” shirt because of the symbol on the front.  That very symbol was used on a flag to rally unity when the American colonies were trying to win their independence from Britain during the Revolutionary War.

Benjamin Franklin even used the rattlesnake as a symbol in his publications dating as far back as 1751.  Franklin was commenting on the British crown’s policy of sending convicted criminals to America and suggested the colonies should send rattlesnakes to thank the British government.

As the American colonies came to identify themselves as free men rather than subjects of the British empire, different icons such as the rattlesnake, the bald eagle, and American Indian became popular symbols.

The Gadsden flag is still flown in Charleston, SC, the city where Gen. Gadsden first presented the flag.

It has also been used as the symbol of the Libertarian Party and then later, the Tea Party and other conservative causes.

In 2016, the Equal Employment Opportunity Commission said the flag doesn’t have racist origins.

NOTE: Metro Voice is an Amazon Associate. You can support our work by checking out Pratt’s t-shirt here.

“Our take … Chris wearing the shirt doesn’t mean he supports white supremacy or anything else hateful or extreme, for that matter. He is, however, known as a conservative guy, and that’s all there is to it.”