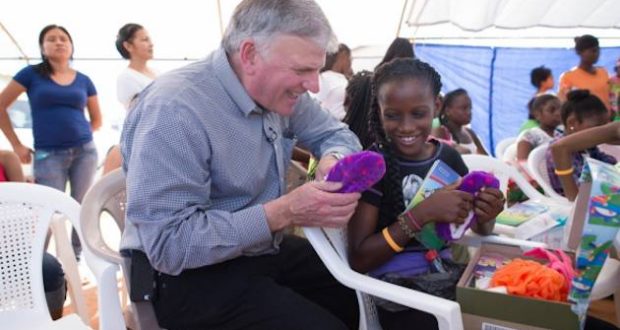 Is the Christmas outreach effort of toy-filled shoeboxes supported by millions of American Christians anti-Muslim? Franklin Graham, founder of Samaritan’s Purse, the organization behind the Operation Christmas Child project, has responded to accusations that it is.

The Guardian columnist Polly Toynbee argues in an article that the gift boxes sent to children, many in Muslim countries, stem from an organization that holds anti-Muslim and anti-homosexual sentiments.

Samaritan’s Purse, which is led by evangelist Franklin Graham, son of the late Billy Graham, responded to the op-ed stating that Operation Christmas Child is “aimed specifically to celebrate the true meaning of Christmas — the birth of Jesus.”

“Our purpose is to show God’s love in a tangible way to children in need around the world. We do this by distributing millions of shoebox gifts to children who are affected by war, disease, disaster, poverty and famine to let them know that they are not forgotten,” the group said.

“No matter where we go, we don’t hide the fact that we are Christians. As our name illustrates, we are upfront about who we are,” he said.

“Shoebox gifts are given to children regardless of religious affiliation and with no strings attached. Our method is demonstrated in love and we hope that our acts of compassion are an example of our faith.”

It took issue with the Bible stories and books dispatched alongside the children’s gifts, arguing that such a strategy targets Muslim families.

Graham, who’s also CEO of the Billy Graham Evangelistic Association, was further accused of being anti-gay for adhering to biblical teachings on marriage — that it’s is a union between one man and one woman. The op-ed also highlighted several of his Facebook posts opposing radical Islamic extremism as an example of perceived anti-Muslim sentiment.

Graham recently faced similar controversy in the U.K. when he preached in Blackpool in September at the invitation of local churches, but was accused by a small group of LGBT activists of promoting “hatred” and “bigotry.”

The evangelist declared earlier in the year that that is far from the truth, however.

Previous: One of last ‘Rosie the Riveter’ heroes lives in Kansas City
Next: Forecasters debate another record snow this winter