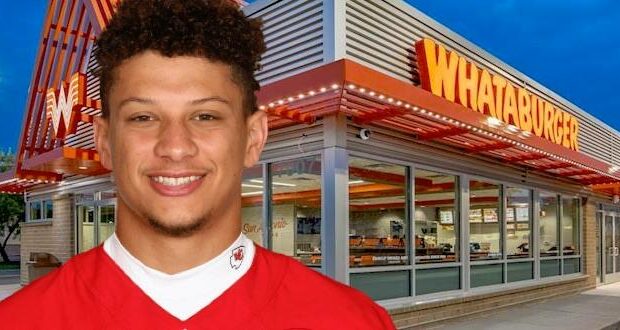 Chiefs quarterback Patrick Mahomes loves fast-food chain Whataburger so much he bought the company. Or at least part of it. Mahomes has invested in KMO Burger, which plans to open 30 Whataburger restaurants in Missouri and Kansas over the next seven years.

“I love Kansas City and I love Whataburger,” he said, according to his hometown “Tyler Morning Telegraph.” “I’m excited to help bring a gift from my first home to my second home.”

Whataburger’s expansion to the Kansas City area began before Mahomes‘ involvement with ownership. But that happened only after he urged the chain to bring a restaurant to Kansas City.

During Mahomes’ MVP season of 2018, he talked about his love for ketchup and mentioned that Whataburger had his favorite. In response, Whataburger tweeted Mahomes a photo of their ketchup bottles and asked him where they could ship them He responded via Twitter: “I just want a store in Kansas City!”

“Obviously being from Texas, you have a lot of Texas pride and Whataburger is at the forefront of that,” Mahomes said to NBC Sports’ Peter King. “And I always ate Whataburger since I was a little kid. And then when I got older, I’d babysit my brother and there was a Whataburger literally down the street, and we would always grab that and kind of have that while my mom was working.

“And so when I got to Kansas City, it was the first time I’d really been out of Texas and didn’t have Whataburger all the time. And so I ended up talking to some people and we ended up making it happen where we’re going to have a lot of locations out here, and I’ll have a little bit of Texas here in Kansas City.”

Four locations are expected to open this year in Lee’s Summit, Independence, Blue Springs and Overland Park. Four more are in the works for next year in Raymore, Kansas City, Kan., Metro North Crossing and 95th and Metcalf in Overland Park. Future locations include Wichita and St. Joseph.