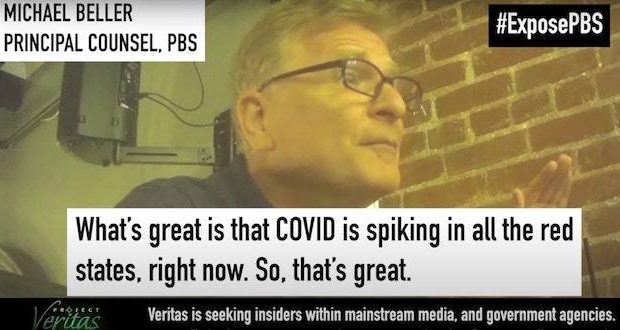 PBS has fired a corporate attorney who advocated violence and sending supporters of President Donald Trump (and their children) to reeducation camps.

A video released by Project Veritas on Tuesday depicts a man named Michael Beller, described by the news outlet as the principal counsel for PBS which is tax-payer funded. In conversations that took place before and after the 2020 presidential election, Beller is heard talking to an undercover journalist in a restaurant-type setting about what should happen to GOP voters.

“What are you going to do if we don’t win?” the undercover journalist asks in one conversation that was aired on Fox News.

“Go to the White House and throw Molotov cocktails,” Beller responded with a grin.

“We were drinking cocktails. It’s a type of cocktail that we were talking about…”

Project Veritas, headed by journalist James O’Keefe, has made several headlines in recent years for its efforts to expose news organizations. Previous revelations from the group include that ABC News spiked a story about the Jeffrey Epstein scandal and that CNN chose to avoid reporting about Hunter Biden’s business interests in Eastern Europe during the election campaign.

In a statement to Project Veritas that was shared on Twitter, the PBS PressRoom said, “This employee no longer works for PBS. As a mid-level staff attorney, he did not speak on behalf of our organization, nor did he make any editorial decisions. There is no place for hateful rhetoric at PBS, and this individual’s views in no way reflect our values or opinions. We strongly condemn violence and will continue to do what we have done for 50 years — use our national platform and local presence to strengthen communities and bring people together.”

Elsewhere in the video, Beller shared his extreme views on what should be done with Trump’s supporters and their children. “Even if Biden wins, we go for all the Republican voters, and Homeland Security will take away their children,” Beller said in the video. “And then we’ll put them into reeducation camps.”

🚨WE MADE THE AP WIRE🚨

NEW YORK (AP) — A lawyer for PBS resigned Tuesday after being caught describing President Donald Trump as “close to Hitler” in a right-wing sting operation. https://t.co/8oCiPedKWb

He then elaborated on his proposed “enlightenment camps,” insisting they are nice places with “Sesame Street characters in the classrooms and they watch PBS all day.”  Beller further spoke about his concerns for children who have grown up “knowing nothing but Trump for four years,” insisting “you’ve got to wonder what they’re going to be like.”

Previous: Woman convicted of killing mother-to-be, cutting out baby, granted stay of execution
Next: Letter to the editor: Covid-19 tester has more lives than morris the cat