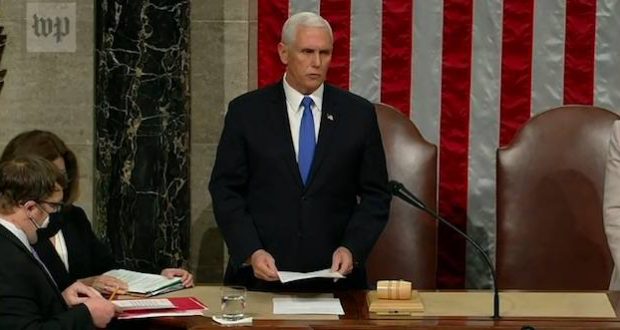 The night-long debate came after over 100,000 protesters filled the National Mall on Wednesday. While the vast majority of protesters were peaceful, unidentified people led a violent attack on the Capitol building, breaking windows, confronting law enforcement, and eventually entering the building. The breach caused the evacuation of both houses of Congress with leaders being whisked away first, followed by Senate and House members.

Florida Senator Marco Rubio, in comments late Wednesday evening from the Senate floor, said he understood why those who voted for President Trump are upset and lack confidence in the election results.

Speaking on why the Senate needed to confirm the election results, he went on to say that objecting to the results of the election is a “terrible idea at this moment.”

Rubio’s comments were echoed by others in both the Senate and House who reminded those present about the violence and loss of life. The death toll now stands at four with one being a 14-year female veteran of the Air Force.

“Just hours ago, a young lady died in this Capitol. That means somebody somewhere in this country got a phone call that their daughter was dead,” he said. “I think it’s important to think about those things on a night like tonight where so much has happened.”

Senator Josh Hawley (R-MO) condemned the violence and upon return to the chamber stated that he would continue to object to the certification based on what he said were credible concerns about the election process. Hawley said he was not objecting based on alleged voter fraud, but rather unconstitutional changes to the election process by Pennsylvania who broke that state’s constitutional process for administering elections.

Hawley had become the leader of those saying they would not certify. His comments turned towards a challenge to both chambers to address the concerns of both Democrat and Republican voters who say the election process is broken and needs to be addressed. The freshman Senator said he wanted to “highlight the failure of some states, including notably Pennsylvania, to follow their own election laws.” He offered specifics during the day, outlining how election laws may only be passed by the Pennsylvania legislature but were ultimately changed just days before the election by state Democrat officials.

When the members of the Senate returned to the chamber Wednesday evening, Hawley announced he would object to Arizona’s Electoral College votes and would object to Pennsylvania when their votes came up.

Hawley condemned the violence that interrupted the debate earlier and said he would continue to object to certain electors.

“There is no place for [violence] in the United States of America, and that’s why I submit to my colleagues that what we are doing tonight is actually very important,” he said from the Senate floor. “Because for those who have concerns about the integrity of our elections, those who have concerns about what happened in November, this is the appropriate means, this is the lawful place where those objections and concerns should be heard.”

Hawley has already submitted an election reform bill to the Senate.

During the evening, the Twitter and Facebook accounts of President Trump were suspended after a tweet failed to sufficiently condemn the violence. Trump was roundly condemned himself by both Republican allies and Democrat critics for not appearing in person via a nationally-televised address to comment on the events of the day. Even many who voted for the President, and who continue to doubt the veracity of election results, commented on social media that he lacked leadership during the day. Some stated that the day’s events, and the President’s response, risk overshadowing the accomplishments of the Trump administration during the last four years.

Early on Wednesday, in fact, Trump had announced another historic peace deal between an Arab nation and Israel. Sudan has now become the fourth Muslim nation to join the Abraham Accords with Israel.

Trump’s absence was in sharp contrast to President-elect Joe Biden who appeared live speaking on the violence while the Trump administration called a “lid” on press contacts late in the afternoon. Metro Voice, which holds White House press credentials, received the availability notification from the White House after 6 p.m. Central Time.

Biden called on the President to “go on national television now” to “demand an end to this siege.” Trump soon issued a video via Twitter calling on protesters to go home and to support law enforcement.

President Trump issued a statement saying “Even though I totally disagree with the outcome of the election, and the facts bear me out, nevertheless there will be an orderly transition on January 20th.”

There is speculation Thursday that some cabinet members may ask for Vice President Pence to push for the removal of the president, with just two weeks to go until the inauguration, under the 25th amendment.