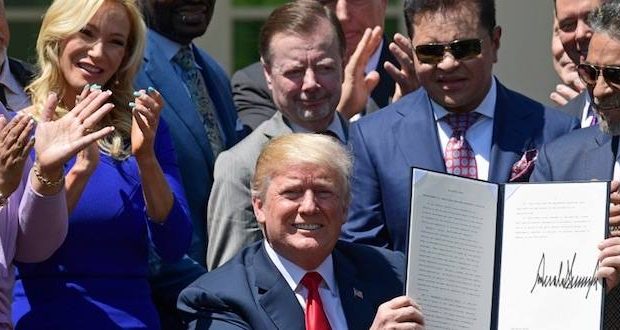 President to launch Evangelicals for Trump at Hispanic megachurch

President Trump will visit a Miami megachurch this week to launch Evangelicals for Trump. The event will be held at King Jesus International Ministry on Friday, according to the Miami Herald.

The church is believed to be one of the largest Hispanic congregations in the country and regularly draws thousands to its dramatic services. Led in English and Spanish by founder Guillermo Maldonado, it is the flagship of a chain of 10 affiliated campuses from Chicago to Homestead, Fla., and has its own broadcasting network, university and an outdoor pool for full-immersion baptisms.

READ: A response to Christianity Today

“El Rey Jesús was a natural fit to launch our Evangelicals for Trump coalition,” Kayleigh McEnany, national press secretary for Trump Victory, said in a statement to the Herald. “Apostle Maldonado is a staunch supporter of the president, reflecting the great and overwhelming support President Trump has among the evangelical community at large.”

The church, also called El Rey Jesús, has long been a popular stop for political candidates courting Hispanic votes. U.S. Sen. Rick Scott of Florida spoke there in 2010 on the Sunday before Election Day during the Republican primary for Florida governor, and congressional candidates in Florida’s 26th district regularly appear there during campaign season.

“It’s a massive congregation, with thousands of people,” said Carlos Curbelo, a Republican former congressman who represented the Kendall area from 2015 until 2019. “And it’s a lot of swing voters.”

While Trump maintains considerable support among the predominately conservative and Catholic Cuban-American voters who have dominated Miami politics for decades, the congregation that often fills the roughly 7,000-seat sanctuary at El Rey Jesus hails from all over Central and South America — a community that makes up a key swing constituency in South Florida.

Maldonado is a Honduran immigrant whose Colombian wife, Ana, been close with Trump.