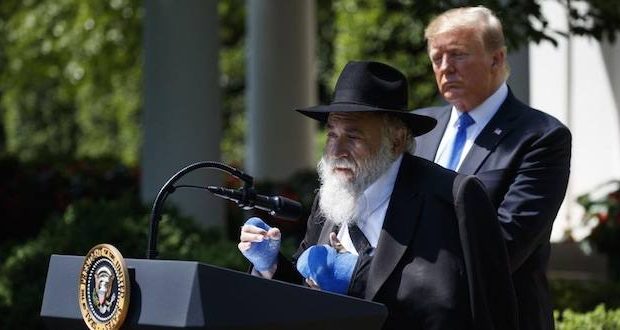 Trump and rabbi Yisroel Goldstein of the Chabad of Poway synagogue spoke by telephone after Saturday’s shooting. Goldstein, who lost a finger in the attack and whose hands were still bandaged, said that Trump was the first person “who began my healing.”

Goldstein thanked Trump for being, “as they say in Yiddish, a mensch par excellence.” Mensch is Yiddish for a “person of integrity and honor.” Trump said Goldstein is an “incredible man,” Goldstein had said at Thursday’s event.

Two other victims of the shooting, including an off-duty Border Patrol agent who fired at the alleged gunman, attended the ceremony.

“Our Nation’s honored tradition of prayer has sustained us and strengthened our trust that God will continue to watch over and accompany us through the best of times and the darkest hours. May we as Americans never forget the power of prayer and the greatness of our Creator,” Trump declared in his day of prayer proclamation.

The president made news by announcing new conscience protections for religious health care providers so that they’re not forced to violate their religious beliefs about abortion.

“Every citizen has the absolute right to live according to the teachings of their faith and the convictions of their heart. This is the bedrock of American life. To protect this heritage my Administration has strongly defended religious liberty,” he said.

And he cited other important faith-based actions he’s taken, like working to liberate preachers from the IRS threats they’ve faced because of the Johnson Amendment, which bans faith leaders from talking about politics.

He further explained his support for religious freedom in his proclamation, saying, “Our Nation acknowledges that religious liberty is a natural right, given to us by our Creator, not a courtesy that government extends to us. The First Amendment recognizes the freedom of religion and safeguards this right against government infringement.”

The president went on to cite the success of prison reform efforts, and then turned to real-life example of the power of faith helping fight the drug crisis in America. He called up a recovering opioid addict named Ashley Evans, who briefly shared how faith has restored her life.

“Finding God saved my life. It’s been incredible,” Ashley said. “It’s been a journey, but without Him, I could not do this… God has been with me every step of the way and everything has worked out.”

She said it’s only “by the grace of God” that she’s now free. And she also thanked her behavioral health worker Angie Dennis whom Trump called up to the podium as well.

Angie explained she helped Ashley by sharing with her, “The biggest honor I could have was to pass along to Ashley that it’s a relationship with Jesus, it’s not a religion or a bunch of rules. It’s just that personal relationship. And if you trust Him and do your part, then trust Him and ask for help for the rest. He’ll open doors that no one can close.”

As he thanked them for sharing their story, Trump declared, “Prayer works miracles and prayer saves lives.”

The president went on to cite the verse from Isaiah 40:31, that those who hope in the Lord will “run and not grow weary, they will walk and not be faint.” He said that’s how he and Vice President Pence have survived two tough years so far in the White House.

“Today we pray for America,” Pence said in some prepared remarks. “And as we pray, let’s pray with confidence, as was inscribed in those ancient words millennia ago, that if His people, who are called by His name will humble themselves and pray, that He’ll do like He’s always done through the long and storied history of this nation: He’ll hear from Heaven and He’ll heal this land, this one nation, under God, indivisible, with liberty and justice for all.”

In closing, President Trump said, “We once again place our hopes in the hands of our Creator.”