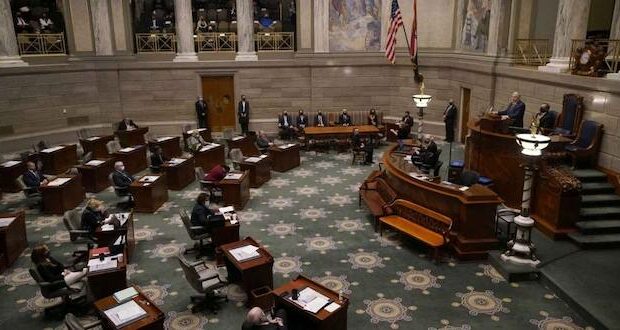 A pro-life amendment adopted by the Missouri Senate this week is slowing action on a bill to fund Missouri’s Medicaid program. “My intent was not to deny Medicaid recipients birth control,” Senator Paul Wieland said. “My intent was to prevent the state of Missouri from paying for abortions.”

Missouri uses a tax on hospitals, nursing homes, pharmacies and other medical providers which is then passed on to patients. That tax revenue then  helps fund the medical program for lower-income residents. Called a reimbursement allowance, the taxes are the major reason general revenue paid only 18.2 percent of the program’s $10.8 billion cost in fiscal 2020.

The Medicaid bill before the Senate, sponsored by Senate Appropriations Committee Chairman Dan Hegeman, R-Cosby, would extend the expiration date of the taxes for one year. The bill is must-pass legislation for balancing the state budget.

Wieland’s amendment would bar the use of Medicaid funds for any FDA-approved medication or device that would cause “destruction of or prevent the implantation of” a fertilized ovum. Those drugs include levonorgestrel, commonly called the “morning-after” pill and some intrauterine devices, or IUDs. Levonorgestrel can prevent fertilization if used soon after intercourse. IUDs are designed to prevent fertilization as well, either through spermicidal action or hormonal treatments.

There was little other discussion and the amendment passed on a 21-12 vote, with Hegeman and Sen. Lincoln Hough, R-Springfield, joining all 10 Democrats in opposition. The bill was immediately set aside after the vote.

The Affordable Care Act, or Obamacare, passed only by Congressional Democrats in 2010 made birth control an essential health benefit that all insurance plans must provide. The law even forced elderly nuns to include birth control in their plans. That portion was later struck down by the Supreme Court. Every state Medicaid program must provide the same set of health benefits, and failure to do so puts the state out of compliance with federal law.

Medicaid expansion has been controversial across the country. The Obama administration promised funding for the expansion which could total billions of dollars. The catch, as those states opposing it contend, is that the federal funding to states is withdrawn after several years leaving state taxpayers footing the bill. Missouri Medicaid expansion has so far met pushback over the cost concern.

“If a device that’s been approved by the FDA kills a human life, that is an abortion,” Wieland said. “I don’t know why the rest of the world doesn’t see it that way.”