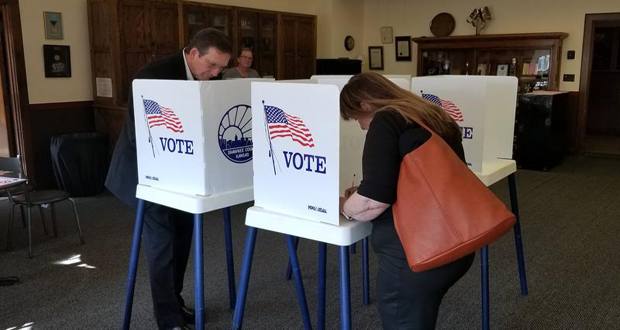 Voters fill out ballots Tuesday at a polling place in Topeka.

If Tuesday’s primary elections were any indication, Republicans will have a large advantage in voter turnout this year.

In Pennsylvania, North Carolina, Kentucky, Idaho and Oregon, Republicans made up 55 percent of the total votes cast, according to John Couvillon, founder of the polling firm JMC Analytics. When factoring in the other five states that already held primaries — Texas, Indiana, Ohio, Nebraska and West Virginia – Republicans account for fully 60 percent of votes cast in the primaries so far.

“In every state where I’ve been measuring turnout changes relative to previous midterms, I’m seeing a clear advantage on the Republican side,” Couvillon said. Data from these primaries suggest that “states that are swinging and are Republican are going to move far to the right.”

Overall turnout in the 10 states that already have had primaries was up 21 percent from 2018, which he noted was a high turnout year in itself. But a partisan breakdown showed a massive advantage for Republicans. So far, Democrat turnout has totaled just less than five million votes while Republicans have cast nearly 7.5 million votes. In addition, Democrat turnout increased by just 3 percent over 2018 while Republican turnout increased by 38 percent.

Democrat turnout went down in five states relative to 2018: Turnout was down 6 percent in Indiana; 29 percent in Ohio; 49 percent in West Virginia; 39 percent in Idaho; and 29 percent in Kentucky. Republicans, meanwhile, increased turnout in every state so far and more than doubled their turnout in North Carolina. Couvillon also noted that the electorate in three states — Kentucky, North Carolina, and Pennsylvania — flipped from 2018 to 2022 from a Democrat advantage to a Republican one. Oregon was the lone bright spot for Democrats. Republicans increased their turnout but made up less of the electorate because of higher Democrat turnout.