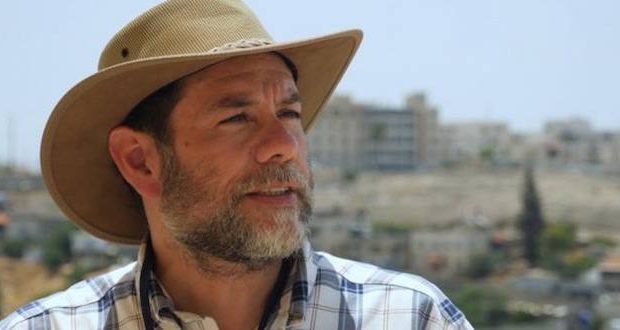 Researcher thinks Ark of the Covenant under the Temple Mount

Could the Ark of the Covenant still be near the underground remains of King Solomon’s First Temple?

For centuries, the search for the Ark has captured the imagination of movie makers, archeologists and even a queen of England.  Legends have placed the Ark in such faraway places as Ethiopia or Ireland. But where is it really and what modern efforts are being used to locate it?

The Ark was a wooden chest which contained the tablets of the laws of the ancient Israelites and was carried on their wanderings in the wilderness, it was later placed by Solomon in the Temple at Jerusalem. It was “lost” sometime after that.

Researcher and author Harry Moskoff believes the secret lies beneath the Temple on the Mount.  His book, The A.R.K Report, chronicles his two-decade quest to find the legendary icon.

He says one theory is that it was taken out of the Temple and carried to Jericho eighteen miles away.

“It says in Jeremiah that some of the vessels of the Temple were exited, sort of escaped as it were, through this area at the destruction of the First Temple,” he explained. 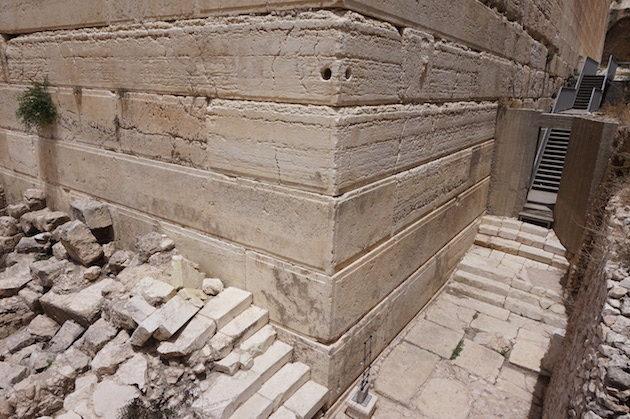 This is the corner of the Temple Mount seen in the diagram below. Notice how the steps are original. (Photo: Anita Widaman) 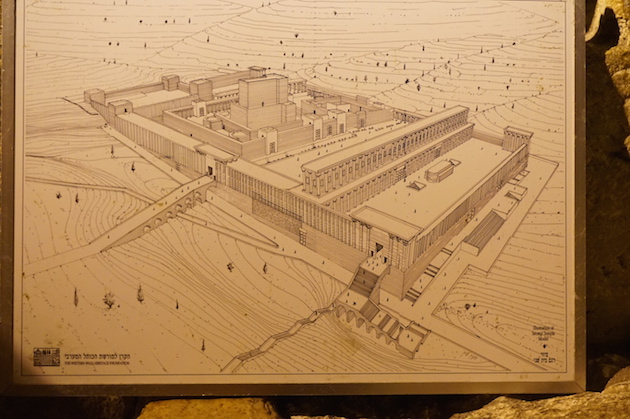 A diagram showing the Second Temple before the Romans destroyed it in 70 A.D. Today you can see the Temple building blocks where they landed as Romans pushed them from the wall above. (Photo: Dwight Widaman)

Moskoff believes a key clue lies behind a 570-ton rock and says high tech search tools give credence to his theory. He’ll even lead you through the Western Wall Tunnels to the spot.

“Two years ago, there were tests done by the University of Nebraska, sonar tests…using electromagnetic waves.  They actually found what’s called a storage space across from here,” said Moskoff.

“So actually, there was a purpose for putting this giant stone, this massive slab here.  One of the reasons, in my opinion, is to protect whatever it is on the other side.  And according to my theory of where the Ark was actually buried by King Josiah, I think it was 568 BC – in back of these boulders, these massive stones,” he said.

Underneath the Temple Mount lie dozens of underground tunnels and chambers. 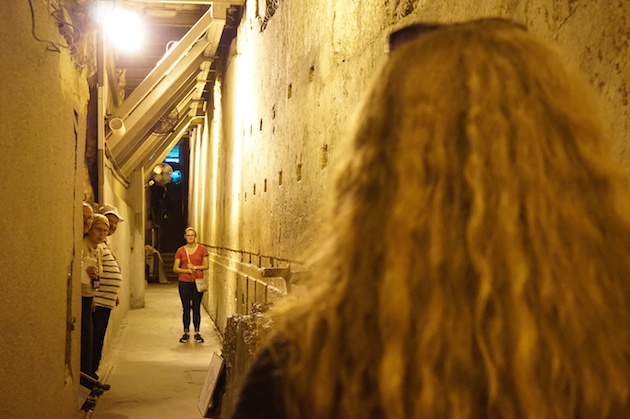 During their family trip to Israel in 2015, Metro Voice publishers Dwight and Anita saw the massive stone in question. Here, their daughters stand at each end. (Photo: Anita Widaman)

“Back then, a 150 years ago, Charles Warren went in and actually did a survey,” Moskoff said, adding that Muslim leaders prevent anyone from excavating underneath the Temple Mount today.

Warren, a British explorer, documented those tunnels at the request of Queen Victoria. He was just one of many throughout history looking for the Ark.

“When people like the Crusaders and the Knights Templar, even an exploration fund, which was originally commissioned by Queen Victoria, came over the centuries to look for the Ark, what they were looking for was a golden box with the staves.  But what they really should have been looking for is a room.  They could have been right up against the wall and on the other side of the wall is the Ark,” said Moskoff.

Moskoff believes the original Holy of Holies had another chamber directly beneath it.

“Actually, in the blueprint itself of the First Temple, a chamber should be built [exactly] the same [as the] Holy of Holies, exactly the same level of holiness as the one just above it.  It was set up right from the beginning to house the Ark, with the golden floor and everything,” he said.

Moskoff explained that Solomon built the Holy of Holies so that the Ark could go below it.

He believes the Ark will be revealed one day.

“Timing is incredibly important, incredibly significant.  Obviously, it’s a groundbreaking, game-changing, biblical type of discovery.  My personal opinion is that when it does happen it won’t be in a clandestine way.  Where we are sneaking through these tunnels, you know what I mean, and we’re bringing it out under the cover of darkness.  It will be a great occasion and will help bring the Messiah.  It will be something all nations will really rejoice in,” the researcher explained.

Moskoff credits Indiana Jones and Raiders of the Lost Ark for the renewed interest.

“There are some things they got right about the power of the Ark…and its destructive forces shouldn’t get into the wrong hands.”

Moskoff wants the world to know that the Ark is more than just a piece of history.

“It’s a real thing. Just like it did 2700 years ago, it still exists today.  It’s got the broken tablets that Moses crashed down there at Mt. Sinai and the second tablets.  It really does exist.  We’re really going to see it, hopefully in our lifetime, again.  It is a catalyst for the Messiah to come.”

Until it is revealed, the Ark of the Covenant built by Moses in the wilderness will continue to fascinate the world.