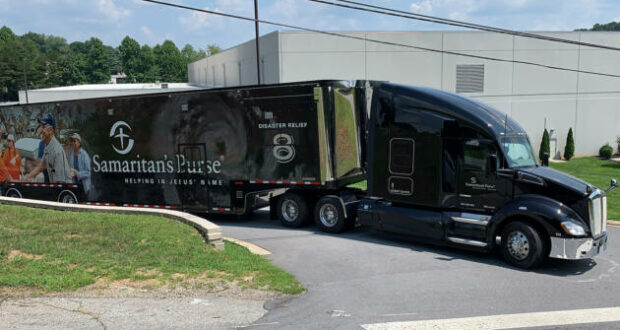 A Samaritan's Ministry Truck pulls out heading to Tennessee.

Samaritan’s Purse has deployed to the state assisting homeowners and counseling those who lost family and friends.  The Billy Graham Rapid Response team is coming in as authorities open the hardest-hit area.

Volunteers, who typically work clearing debris and helping families recover are scheduled to move in but do not want to get in the way of recovery and rescue.  More volunteer details will be posted at spvolunteer.org.

Samaritan is asking for prayer for the many families struggling in the aftermath of this storm. “Pray that they will experience God’s peace and comfort during this difficult time,” they posted on social media.

“There’s still a lot of debris in and along the creek that needs to be examined. That’s a painstaking process,” Gillespie said during a news conference. “We have to tear that apart, a lot of times, with equipment.”

The police chief said the number of people considered missing has fluctuated, as people have not been able to reach loved ones who are later confirmed to be safe.

“I’m reasonably sure that we are less than 10 right now that we are truly not sure about the whereabouts of, or that we don’t think we’ll resolve fairly easily,” Gillespie said.

Many of the missing live in the neighborhoods where the water rose the fastest, said Humphreys County Sheriff Chris Davis, who confirmed the 24 fatalities in his county alone. The names of the missing were on a board in the county’s emergency center and listed on a city of Waverly Facebook page, which is being updated as people call in and report themselves safe.

The Humphreys County Sheriff Office Facebook page filled with people looking for missing friends and family. GoFundMe pages asked for help for funeral expenses for the dead, including 7-month-old twins swept from their father’s arms as they tried to escape.

“We are deploying crisis-trained chaplains to share the hope and peace found in Jesus Christ even in life’s toughest times,” said BG-RRT assistant director Josh Holland.

The community is preparing for weeks of cleanup and rebuilding, as home and business owners sift through the water and mud. Some homes were completely washed away.

BG-RRT chaplains will be the hands and feet of Jesus as they minister to those dealing with the damage and destruction.

“Our sincere prayers go out to the families impacted by the tragic flooding in Haywood County. We also pray for first responders currently undergoing search and rescue efforts,” said Holland.

e than 3 inches, the National Weather Service said, though Saturday’s numbers will have to be confirmed.