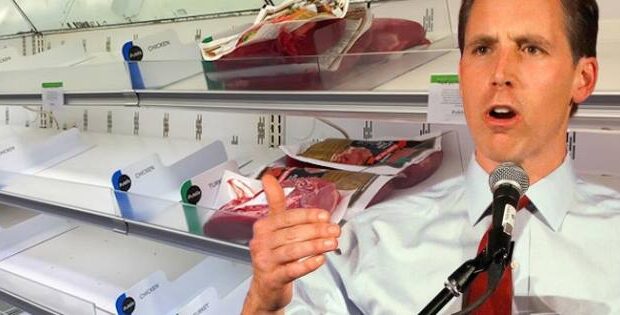 The coronavirus pandemic is exposing many flaws in the nation’s supply chain for essential items such as food. Sen Josh Hawley, R-Mo., is calling on the Federal Trade Commission to begin an antitrust investigation into the nation’s meatpacking industry.

Four companies process 85 percent of all U.S. beef, he said. “Right now the meatpacking industry has become too consolidated,” he said. “We’ve got just one or two or three companies who control the whole thing.”

As thousands of farmers lose their markets because of supply chain shutdowns, #coronavirus has revealed incredible concentration of meatpacking & processing industry. Monopolies are bad for farmers & consumers. FTC should investigate https://t.co/0VHBhtOZq5

Hawley said Missouri farmers and ranchers have approached him, especially in recent months, saying they are desperate to have more options when it comes to selling their livestock. Hawley serves on the Homeland Security and Governmental Affairs Committee, which is the U.S. Senate’s chief oversight committee. He is calling on the FTC to “ask probing questions about the major meatpacking firms’ conduct, pricing and conduct.”

He and Sen. Tammy Baldwin (D-Wis.) wrote a letter to the FTC saying that the closing of three pork pants because of COVID-19 has resulted in the “shutdown of a staggering 15 percent of America’s pork production.”

Hawley and Baldwin said the concentration has undermined the stability of America’s meat supply and is an issue of national security.

Previous: Creators of “War Room” movie plan online event for May 8
Next: Shawnee County: Decision on Spirit of Kansas to be made by June 1