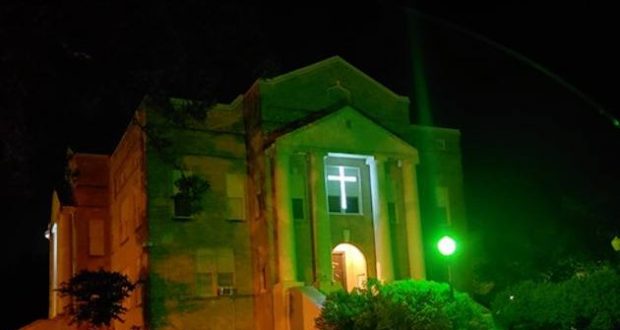 One resident posted: "THIS is how we roll in San Jacinto County! Not only did we not cower to the Wisconsin Whiners, we Lit Them Up!"

A small town near Houston, Texas, has decided to keep crosses on a county courthouse after a group demanded that they be taken down.

The Freedom From Religion Foundation, based in Wisconsin, complained that four white crosses should be taken down immediately, Click2Houston reported.

“These crosses unabashedly create the perception of government endorsement of Christianity,” an attorney for the national organization told a local judge.

However, County Commissioners Court voted unanimously last week to keep the crosses on the San Jacinto County Courthouse in Coldspring, Click2Houston reported in a later article.

More than 600 people showed up to the meeting. The town has a population of 900 people.

“If it offends them, close your eyes when you go by,” David Blevins, a local, said. “If you don’t like it, don’t look at it.”

Terry Holcomb, a local preacher, also delivered a message to the Freedom From Religion Foundation. “Go suck a tailpipe,” he said to a standing ovation.

Meanwhile, according to a photo posted by Dwayne Wright, chairman of the local Republican Party, the town illuminated the crosses in an act of defiance.

“THIS is how we roll in San Jacinto County! Not only did we not cower to the Wisconsin Whiners, we Lit Them Up!” he wrote on Facebook.

In an interview with Fox host Todd Starnes, he said it was a David versus Goliath moment for the town of Coldspring.

“We absolutely identify with David’s plight and we’re willing to toss that rock,” Wright said on the show.

“Even a small, tiny speck of a community–when you come together and you share conservative principles–you can push back against any of these anti-religious groups,” Wright said. “We don’t need freedom from religion. We need freedom of religion.”

The Freedom From Religion Foundation, meanwhile, recently objected to a photo of the Ten Commandments at a middle school in New Philadelphia, Ohio, according to the Times-Reporter.

Superintendent David Brand stated the plaque of the Ten Commandments was a gift from the Class of 1926. It’s been there since the 1920s.

“It is the District’s understanding that others have removed displays to avoid protracted and costly litigation,” Brand said in an email last month. “The District is conducting its due diligence and will be making the best decision for its students, district, and community. The New Philadelphia City School District is committed to serving its students and community to ensure achievement, commitment, and excellence for all.”

Trump declared Jan. 16 to be Religious Freedom Day and called upon the nation to protect the heritage of religious liberty both at home and around the world.

“The right to religious freedom is innate to the dignity of every human person and is foundational to the pursuit of truth,” he said in a statement on Jan. 16.

“Efforts to circumscribe religious freedom—or to separate it from adjoining civil liberties, like property rights or free speech—are on the rise.”

According to Trump, legislative and political efforts to restrict individual liberty and conscience are the main culprit of attacks that occurred in recent years, such as the mass shooting at the Tree of Life Synagogue in Pittsburgh, Pennsylvania, in October last year. The attack killed 11 people, making it the deadliest attack on the Jewish community in the nation’s history.