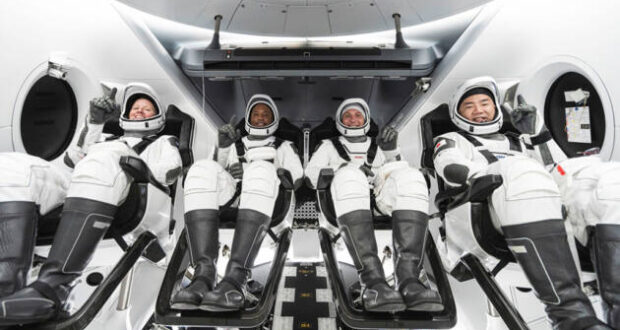 SpaceX and America heralded its historic return to regularly launched manned space flights from US soil on Sunday.

A Falcon 9 rocket carrying four astronauts lit up the night sky on Sunday with a crew of four headed to the International Space Station.

The flight means NASA planning to end the country’s reliance on Russia to access the ISS. Since 2006 under former President George Bush, NASA has paid the Russians $4 billion buying seats on the Soyuz rocket. The seats cost $80 million each.

“The view is beautiful. That was one heck of a ride,” Hopkins radioed the command center.

It’s the first “operational” flight of Musk’s crewed commercial spacecraft, and only the second time NASA has launched astronauts from American soil since the end of the space shuttle program in 2011. The test flight was in May.

The launch from pad 39A at Kennedy Space Center is a major milestone in NASA’s Commercial Crew Program and for SpaceX, the first commercial enterprise to put humans in orbit. Benji Reed, SpaceX’s director of crew mission management, said it revives regular crewed launches to the space station from the United States and a continual Crew Dragon presence at the station.

It’s also a crucial step in NASA’s Artemis program that aims to put astronauts on the moon by 2024 and, then, eventually on Mars. The last time someone visited the moon was during NASA’s Apollo 17 mission in 1972.

“That’s ultimately what we’re trying to achieve here … and because of what’s happening today, all of these things are going to be possible in the future,” NASA administrator Jim Bridenstine said.

The four astronauts will now spend 27 hours in space before reaching the station at about 11 p.m. Monday. They’ll stay there six months, joining Kate Rubins, Sergey Ryzhikov and Sergey Kud-Sverchkov who arrived in October by the Soyuz MS-17 spacecraft, before splashing back down off the coast of Florida.

They named their capsule Resilience in recognition of the trying year 2020 has been amid a global coronavirus pandemic that’s claimed more than 246,000 American lives and national unrest during a contentious presidential election.

“We felt like if the name of our vehicle could give a little hope, a little inspiration, put a smile on people’s faces, then that is definitely what we wanted to do,” said Hopkins, an Air Force colonel who commands the mission.

Over the next 14 months, SpaceX plans to launch at least seven times to the space station, some with astronauts and some just cargo, Reed said.